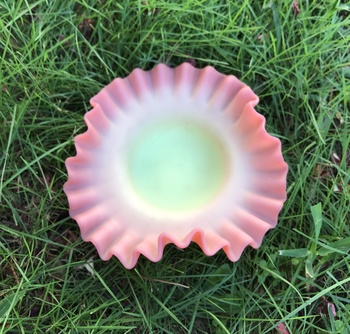 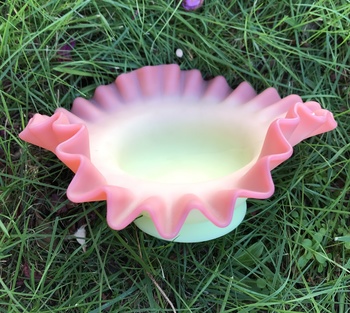 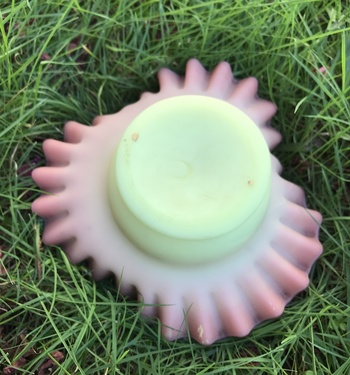 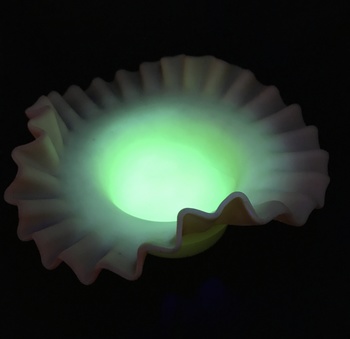 This Burmese glass bowl was kindly given to me by a dealer, who knew I'd appreciate it, despite its issues (there is a hairline crack).
I am not certain if this is an original Victorian piece, or a later one by Fenton...the shape is right for a fairy lamp base, however the thickness of the glass itself, & the slightly more granular satin finish is suggestive of Burmese of 20th century manufacture. The Webb Burmese items I have are all much thinner, & one's fingers almost slip off the satin finish, so silky smooth it is. I do own a few examples of 1970s Fenton Burmese (& have sold on several others) & this bowl does seem to have some aspects in common with them, although it is unmarked.
Whoever made it, Burmese glass is in itself a delight, an alchemical mixture of gold & uranium that suggests blushing flowers, glowing sunsets, & sugary sweet confectionery...
This bowl measures around 7 cm tall, 16 cm across the trefoil crimped top rim, & 6.5 cm across the base. No pontil mark.
As can be seen in the last photo, the bowl contains uranium & glows under UV light. 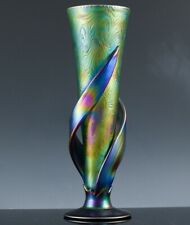