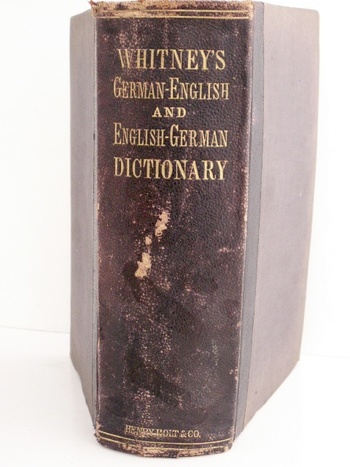 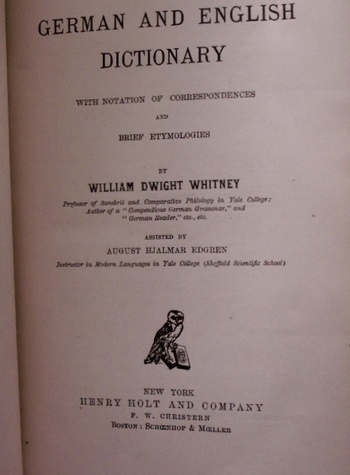 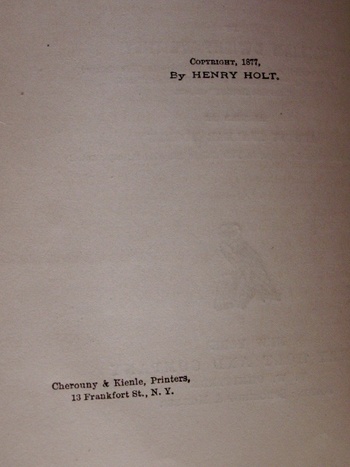 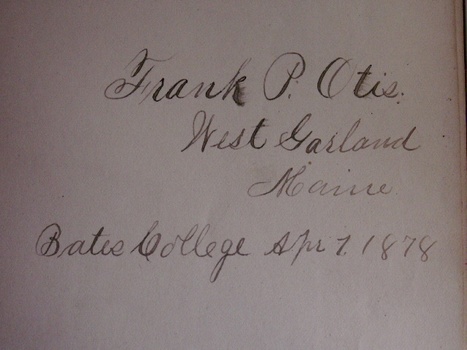 What interested me, was an inscription on a blank page preceding the Title Page, is written in fancy script:
Frank P. Otis
West Garland
Maine
Bates College Apr. 7, 1878

Some information I found on Frank Pierce Otis:

Otis, Frank Pierce, was born at Garland, May 8, 1852. He fitted at Pittsfield with a total attendance of 77 weeks. He has been in attendance at College 101 weeks of his course. Meanwhile, he has taught 5 terms, earned $1000, and spent $1400. He is a Congregationalist in religious belief, and will choose Law as his profession. His height is 5 feet 11 inches, and weight, 167 pounds.

In another book of graduating students, Frank P. Otis was listed as a graduate in 1879.

Some information I found on Bates College, noted in Wikipedia:

Bates College is a private liberal arts college in Lewiston, Maine. It was founded by abolitionist statesmen and established with funds from industrialist and textile tycoon, Benjamin Bates. Bates is the oldest coeducational college in New England, the third oldest college in the State of Maine, and the first to grant a degree to a woman in New England.
At its foundation in 1855 as the Maine State Seminary, it was one of the only colleges in the U.S. to admit black students before the issuance of the Emancipation Proclamation and the 13th Amendment. Its founder, Oren Burbank Cheney, established it as a Free Will Baptist institution, however, it has since secularized and established a liberal arts curriculum. Centered on the Historic Quad by two garnet gateways, the urban campus totals 813 acres (329 ha) with 33 Victorian Houses distributed throughout the city. It maintains a coastal center of 80 acres (32 ha) on Atkins Bay and 600 acres (240 ha) of nature preserve known as the "Bates-Morse Mountain" near Campbell Island.

Thanks for taking the time to read this post,
Dave 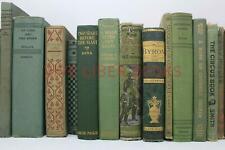