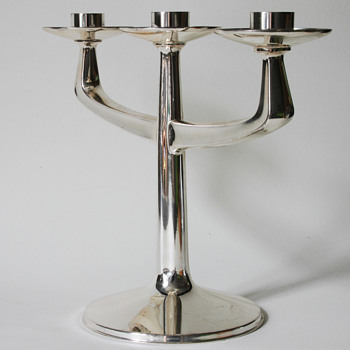 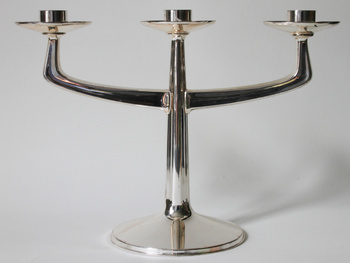 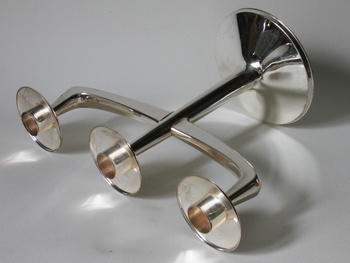 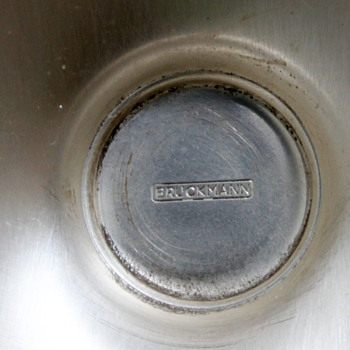 three-light candelabra in the classical art deco to modernist design by Peter Bruckmann & Söhne (1805-1973), Heilbronn, Germany
In 1907 Peter Bruckmann Senior met Hermann Muthesius, whose speech in Berlin convinced him that modern life also requires a formally new orientation of the arts. Shortly thereafter mr. Bruckmann drove to the founding session of the Deutscher Werkbund. With enthusiasm proclaimed: "Artistic and commercial forces must lead the handfuls and the laborers down to the apprentice with joy and inner compassion to do good work together." (Die Form, p.297 / 98) Peter Bruckmann became the Deutscher Werkbund chairman from 1909 to 1919. In 1923 he withdraws from the company and leaves the management to his son, who was also named Peter.
this candlelabra is a little tricky to get the propper period it was designed... I've seen it attributed to be art deco
some designers who worked for Bruckmann are: Hans Christiansen, 1866-1945, Richard Riemerschmid, 1868-1957, Adolf Amberg, 1874-1913, Friedrich Adler, 1878-1942, Paula Straus, Stuttgart 1894-1943..... no idea who is responsible for the design of this candelabra though