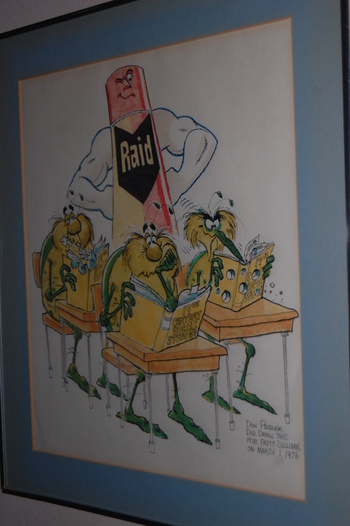 Don Pegler, the creator of the Raid bugs, drew a 14 x 16 picture of a can of Raid standing behind 3 buggy students. The three Raid bugs are poring over books of 19th century social studies.

In the lower left hand corner he wrote:

Don Pegler
did draw this for
Patty Sullivan
on March 1, 1976

Don Pegler and my father were best friends since kindergarten until my father's death. As part of a school project, I had to interview somebody interesting or important and my father suggested that I interview Don. Don Pegler was the originator of the Raid bug cartoons and worked for over 50 years at Foote Cone and Belding.

At the time of the interview, the Raid commercials were still the one minute animated spots.

At the end of our conversation, I boldly asked him if he could send me a drawing of a Raid bug for me to include with my report. With the low expectations of an 11 year old, I expected a drawing on a half-torn sheet of paper. Imagine my surprise a few days later when this large package, wrapped in cardboard, arrived at the house and was addressed to me!

After my report was completed, the drawing was professionally framed and matted.