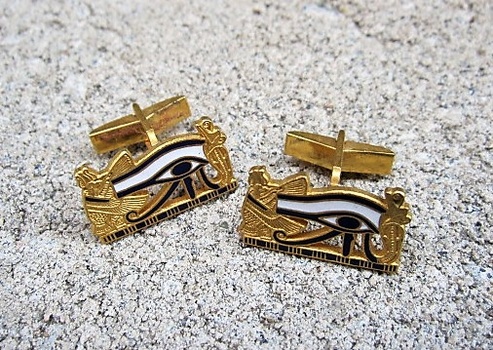 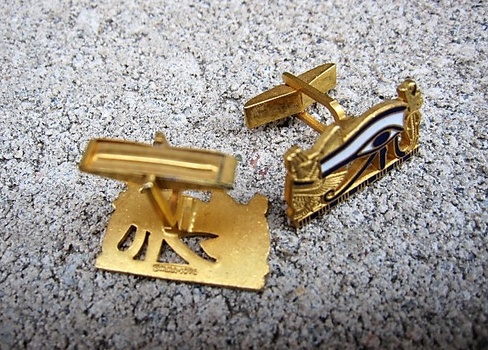 I did not get to go to this exhibit in Chicago 1977 but I watched and bought books and now years later I've found some of the MMA reproduction jewels like these cufflinks. Below is a recap from the Chicago Field Museum.

"They waited in long lines (sometimes overnight) to enter the dimly lit corridors lined with ancient Egyptian artifacts. They emerged into a larger room holding the gold sarcophagus of the ruler who had died at age 19, King Tut. They exited through the gift shop, leaving the museum with scarves, tote bags, prints, and books emblazoned with his image. And if they had a little extra cash, they walked home with expensive replicas of what they’d just seen. It was Tutmania at the Field Museum in 1977 as The Treasures of King Tutankhamun (boy king of the New Kingdom in Egypt 3000 years earlier) came through town, breaking attendance records and adding millions of dollars to the city’s tourist trade. Nearly 1.3 million visitors attended during the four-month stop of the exhibit. It was on a six-city U.S. tour, the first time anything from the tomb discovered by Howard Carter in 1922 had come to America, and the whole thing had a rock star quality to it."

Years later, and as a matter of fact it was right after September 11 2001, my boyfriend decided to go to Egypt anyway and had a wonderful vacation. He said the Cairo Museum was a dusty wreck which surprised him. He was also a teen during Tutmania craze and hoped to see the hoard in their home, but Tutankhamun's most famous artifacts were on tour somewhere else. LOL - always about money.