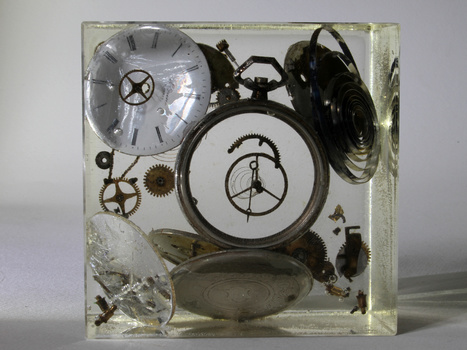 Pierre Giraudon, born in Paris in 1923
Giraudin actually studied botany not art or design and always considered himself a biologist, rather than an artist.
After settling in Canada in 1949, he discovered, in the context of his university research, a unique way to integrate plants and animals into translucent blocks made of resin, while working at the Montreal Biological Institute.
Bioplasty was born.
After returned to France, Giraudin started playing with this new material, diverting it from its primary purpos, creating resin pieces, with or without ingredients inside, shaping horse heads, hands, coffee tables. His growing fame earned him prestigious orders for unique pieces for fashionhouses like Dior or Hermes, but also for other artists such as Arman, Dali or César.
This Giraudin block shows a french pocket watch, which looks like it is freezed in time while exploding
nice idea...i like it