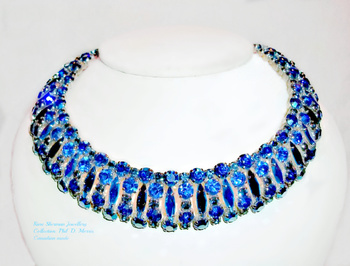 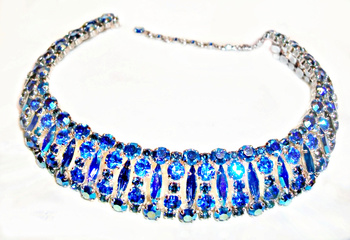 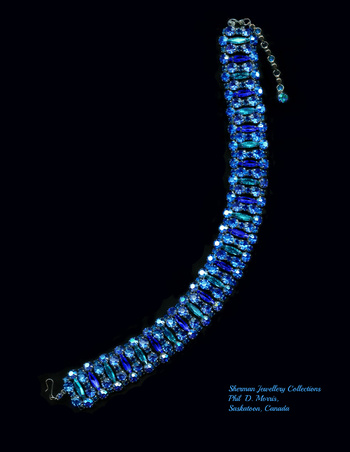 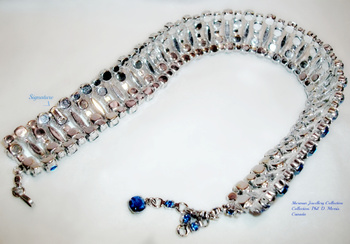 This handsome and very impressive necklace dates from the 1960's, made by the well known Canadian firm of "Sherman" designed as a 1" openwork dog collar or choker featuring borders of small round shaped crystals with alternating marquise and round shaped crystals for an open work motif. The necklace is done in a series of dazzling and intense sapphire and peacock blue AB color round and marquise shaped crystals set in a rhodium plated setting. The necklace measures 13.5" in length with a 3" extension chain for a total length of 16.5".

Although the necklace cost in the hundreds, I feel it would have cost more in todays market and I feel I got a deal just to own such a magnificent piece, its simply, but absolutely astonishing !!! The necklace cost a pretty penny but would have cost a lot more if it were a bracelet even though this neckace had not been seen before. I do have quite a few braclets which are an exact match now. It is my favourite design, from all I have ever seen in a bracelet !

The necklace is not in the book, "Sherman The Masterpiece Collection" at all. The authors never had one. It is so stunning it is hard for me to believe my eyes. I will post some new photos in some days. If it were a bracelet it would be about half the size less extenders and about more than half more than what I paid as mentioned in last paragraph !~ 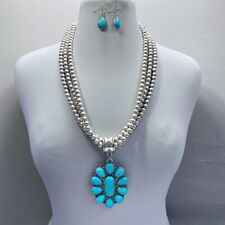 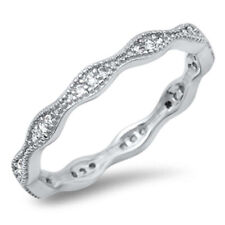 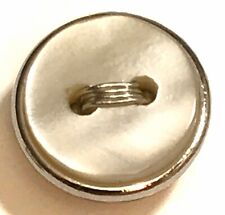 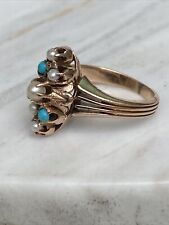