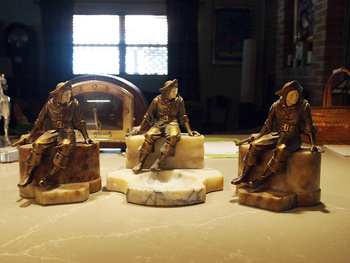 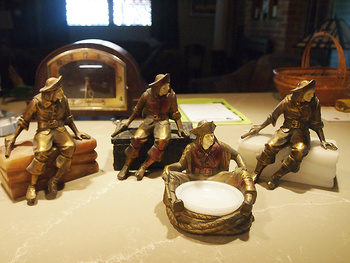 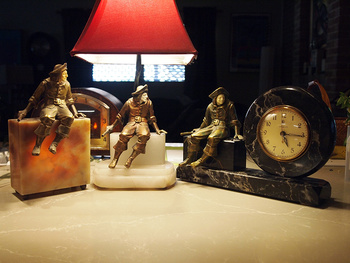 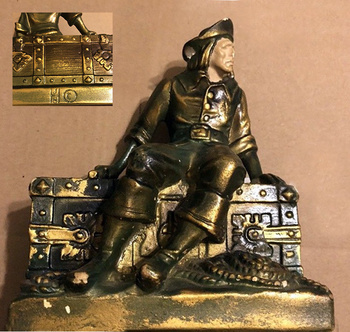 In his book "Collector's Guide to Bookends", Louis Kuritzky states " This same figure has been seen on a variety of marble and metal structures, on a jewelry box, lamps etc...and portrayed in chalk as well."
He was a popular figure, he was in production from 1925, until well after WWII. This little guy is what got me interested in J. B. Hirsch items.
Here are most of the items that this figure has seen on.
Picture one - Set of bookends and a change valet.
Picture two - Set of bookends (one white and one brown alabaster), trinket box, and a change bowl.
Picture three - Brown alabaster nightlight (only known example) and a rare white alabaster lamp (lampshade not original), and a Whitehall - Hammond clock 1928-31).
Picture four - Wartime chalk bookend, the Hirsch mark and copyright symbol are on the back of the bookend on the bottom of the base (see inset photo). During the war metals were in short supply, Hirsch switched a number of their items from spelter to plaster or chalk. These Items are rare because of breakage or wear. It is rare to find a set without any damage.
There is probably a pipe bowl to this set also, I just haven't run across it, yet!

John Ruhl was an American sculptor of German descent born April 14, 1873 in New York City and died November 19, 1940 in Hackensack, New Jersey.
At an early age John knew exactly what he wanted to be when he grew up. He wanted to be an artist. His parents, Anton and Frieda, did everything they could to discourage him. They felt that all artists starved in attics. When he left the New York public school system, his father made him take a job with an insurance company as a clerk. He hated the work and longed for a career in the art field.

In 1888 he enrolled in the Metropolitan Museum of Art School. In April the following year, the Art School sponsored a contest for the students. Unbeknownst to his parents, John entered the contest. On Saturday, April 28, The New York Sun reported, "The main prize of one hundred dollars was the Robert Hoe prize, offered in open competition for ‘an object of art.' The prize ‘For a Yacht Race' was won by John Ruhl whose design was a large vase shaped cup, done in plaster, it bore in bas relief on the body images of yachts in full sail and the handle was a dolphin." His parents were very impressed. At the age of 16 he earned probably more than his father made in a month in his shoe store. As a result, his parents decided that maybe they had better leave him alone. So John left his insurance company job and went to study for about three years with a prominent sculptor.