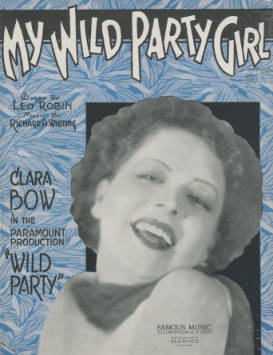 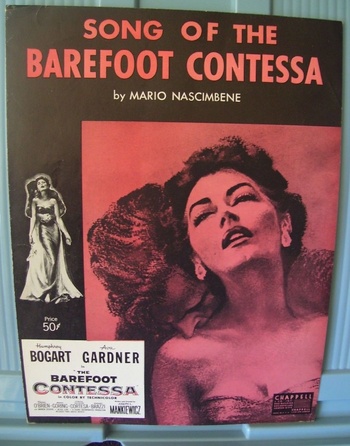 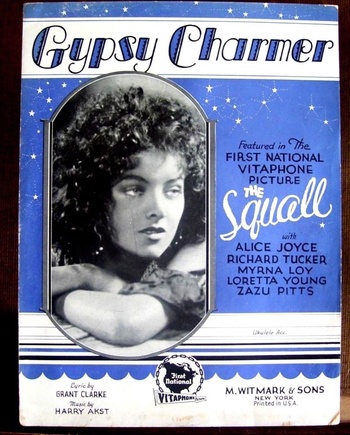 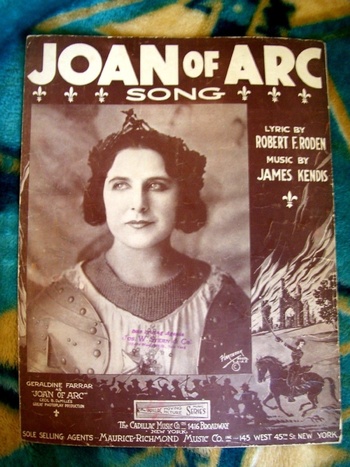 Rare sheet music for BIG HOLLYWOOD HIT STARS! Near impossible to find--and I found them! ( It took time and some money, but if you have these, don't sell them for peanuts!
PHOTOPLAY PRODUCTION, 1916, CECIL B. DE MILL'S "JOAN OF ARC" STARRING JOSEPHINE FERRAR.... absolutely OBSCURE, and in VG condition with a gorgeous photo of Miss Ferrar, as the bold and brave warrier til she was burned to death as a spy---the sad fate of Joan Of Arc. This was a big production of the silent film days and Ferrar was a HUGE International star,,,. as she was , besides a fine actress, a star of opera too

GYPSY CHARMER song from the movie THE SQUALL 1929 Early "takie".
A fiesty and sexy gypsy (Myrna Loy) disrupts the lives of a conservative farm family. She has sex with them all, Grandpa,Dad, and son--plus how many more?
MYRA LOY is"Nobie" a gypst thief, but provides sex free. A shocker is her darkened skin. Not the Myrna I remember but this is early on in her career.VG PLUS condition.There is a teeny corner fold upward in lower right --that is all
Rare? Ahhh, you better believe it!
First National Picture. Before movies had a "code" that would not have "passed" this one as it would have been deemed immoral. to most viewers of the day

LIKE NEW OLD STORE STOCK!! THIS IS FRAMABLE 9X12 SHEET MUSIC (Complete,Original) That has the LOOK OF a movie poster or Lobby Card. It is paper and in pristine condition 1954, AVA GARDNER and a lover . (Humphry Bogart)was the co-star) Very exotic
TITLE--THE BAREFOOT CONTESSA. Really great cover!! And you can play the tune--Near mint 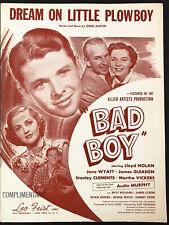