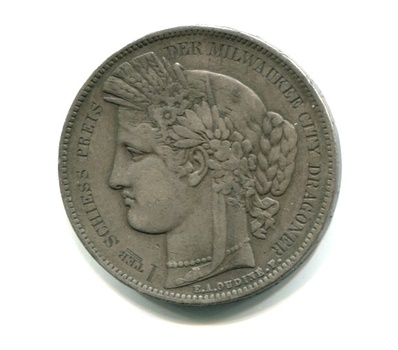 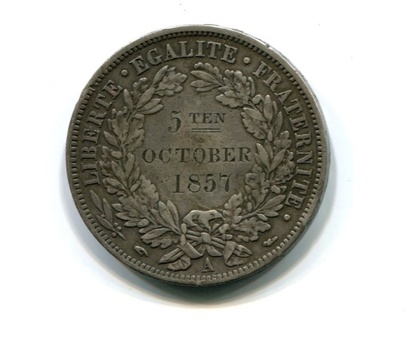 Marksmanship was traditionally a highly prized skill among the Germans and so it was with the Milwaukee City Dragoons as evidenced by this shooting prize coin-medal. The award is made from a converted French 5 franc coin type of KM-761 minted in Paris sometime from 1849-1851. The coin is .900 fine silver and nearly the same size and weight as the US silver dollar. Some of the coin’s original legend and inscriptions were machined off and replaced with the engraved German text, “DER MILWAUKEE CITY DRAGONER. 1 TER SCHIESS PREIS” on the obverse. On the reverse the date and denomination was removed and replaced with the engraved, “5 TEN OCTOBER 1857”. This translates as “The Milwaukee City Dragoons First Place Shooting Prize, October 5, 1857.” This also tells us that the unit changed it’s name before Oct. 5, 1857 and also that they were large enough to hold their own shooting contest. Unfortunately no newspaper reports of the event could be found to tell us who the prize winner was. Why was this coin chosen to be the host coin? First of all the coin design was attractive and inoffensive so a new planchet and expensive dies were not needed. The coin was also readily available since foreign coins like this still circulated in the United States until 1857.