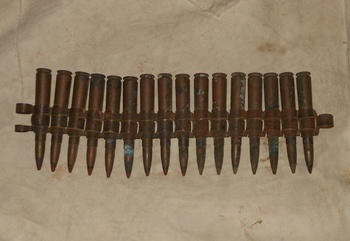 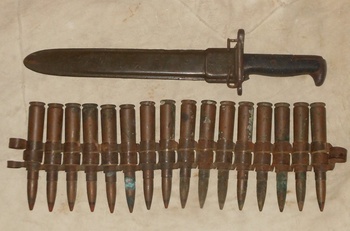 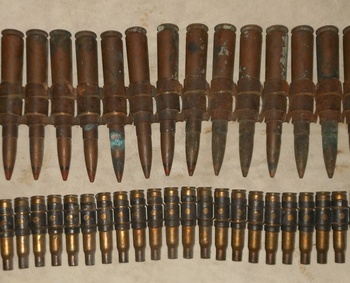 The Ma Deuce is the M2 .50 caliber machine gun. This is the linked ammunition from the often seen ammo cans. These were used in WWII and are still used today. These were famed for use by the American planes of WWII such as the B-17, B-25, P-51 P-47 etc. Everyone else was using the .30 ammo seen in photo #3. Also used on just about every US vehicle in WWII. Removes logs, stone walls, engine blocks, tanks not so much but still a handy round.
Photo #2 has a bayonet to show scale as does photo #3 with its .30 ammunition. Actually that is the 7.62 x 51 aka the 7.62 NATO round. The .30 caliber rounds used in WWII were a bit longer but no match for the .50. There was the 20mm cannon round but it was too slow.
Sorry to preempt Hot Wheels Wednesday but due to a work emergency which I not supposed to mention according to company social media policy I did not have time to take photos. I am also supposed to say I work for a greeting card company.