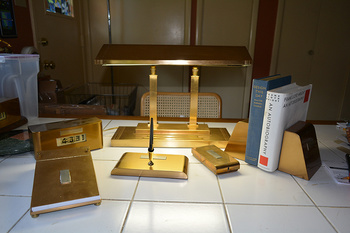 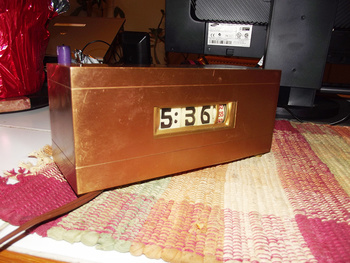 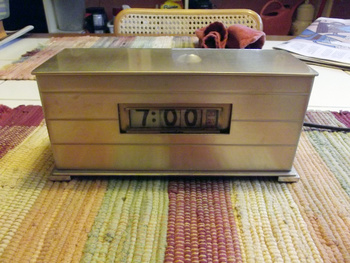 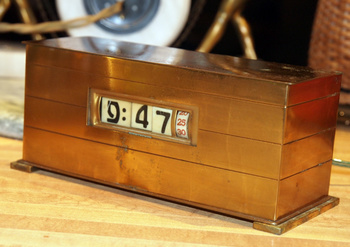 Smith Metal Arts is located in Buffalo NY, it is still in operation today as Smith Mc Donald Corp still turning out very exclusive and expensive desk sets as they did earlier (see first picture). They no longer manufacture their earlier digital, or jump hour clocks they now include a regular analog clock with their sets now.

MoonCrest clocks are stand alone, not attached to pen trays like their bigger brother, SilverCrest Clocks.

The clocks on this page were manufactured so they could accept either a Pennwood or a Lawson digital movement. If the clock had a Lawson movement in it the model number is usually missing unless engraved in the metal. Vendors on eBay try to pass them off as Lawson manufactured clocks because of the Lawson movement and the higher bids Lawson clocks draw. The designer for these early clocks and desk sets was designer Peter Muller Munk (who also designed early cases for Pennwood.

Smith Metal Arts Company
Smith Metal Arts Company was started in Buffalo, New York in 1889 by German immigrant, metal and leather craftsman Otto Heintz. The Art Crafts Shop began producing a variety of items primarily from copper. Otto changed the name to the Heintz Art Metal Shop in 1906, and instead of the main metal being of copper as the base material he started utilizing bronze and sterling silver.
The Heintz company manufactured many items such as vases, candlesticks, bowls, smoking sets , lamps, frames, jewelry, and desk accessories. Heintz's passed in 1918 and the company was purchased by Frederick Smith who was their top salesman. With the help of Peter Muller-Munk the company evolved into exclusive designs of desk sets and office accessories.