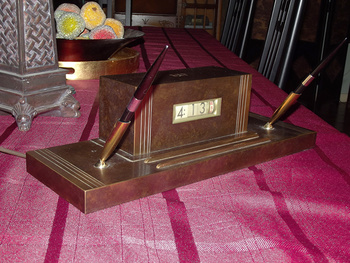 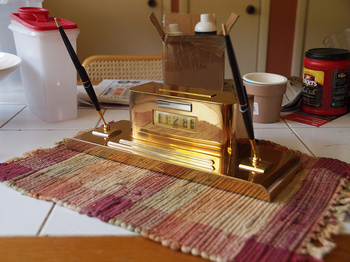 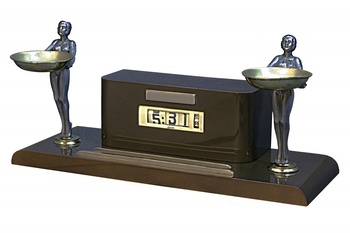 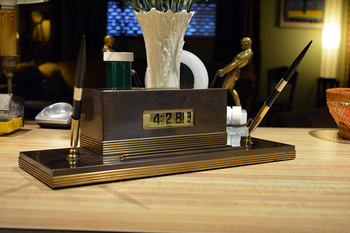 Although Smith Metal Arts made these clocks and the MoonCrest lines, they did not keep records on how many were made
Smith Metal Arts is located in Buffalo NY, it is still in operation today as Smith Mc Donald Corp still turning out very exclusive and expensive desk sets as they did earlier (see first picture). They no longer manufacture their earlier digital, or jump hour clocks they now include a regular analog clock with their sets now.

SilverCrest Clocks are attached to pen trays unlike their little brother MoonCrest clocks which are not.

The first picture features SMA "Bronze Duo" jump clock, the "Bronze Duo" line of desk accessories is still in production but the jump clock has been replaced by an analog clock.

Like the MoonCrest clocks, the clocks on this page were manufactured so they could accept either a Pennwood or a Lawson digital movement. If the clock had a Lawson movement in it the model number is usually missing unless engraved in the metal. Vendors on eBay try to pass them off as Lawson manufactured clocks because of the Lawson movement and the higher bids Lawson clocks draw.
There is one exception on this page in the fourth picture, Randy Juster of his Decopix website (http://www.decopix.com/the_lawson_clock_story/) after examining this presentation clock seemed to think it was probably manufactured by Lawson as a special product. This clock is not drilled to except a Pennwood movement like other SMA clocks. The clock was presented to Charles E. Sweet And has a brass plate with "Charles E. Sweet" engraved on it.

The inscription reads;
"In appreciation of his splendid service To the Farm publication Industry of America.
Agricultural Publishers Association"

About Charles M. Sweet
Charles E. Sweet Identified with the Capper Publications, Inc., for the last thirty-six years, Charles E. Sweet was born in Burlington, Kan., August 17, 1893, son of Gilbert and Emma Louise Whistler Sweet. He began his career in the publishing business by working as a printer’s devil while attending Burlington High School, and after his graduation became a printer, then a reporter on the Burlington Republican. In the fall of 1913 he entered the University of Kansas journalism department to learn more about the business, worked as a printer in a job shop Suring the three year course , and published a weekly newspaper for Ralph Tannal in the summer of 19 14. For several months in 1916 he published a weekly for Charles H. Browne, then served a short time as city editor of the Iola Register, and i n 1917 went to work as a reporter on the Kansas City Star. When World W ar I started he entered the second Officers Training Camp, was commissioned a second lieutenant, later promoted to first lieutenant, and serve d a total of nineteen months.

Following his honorable discharge from the Army, Mr. Sweet returned to the Kansas City Star as an assistant telegraph editor but in September 1 919, came to Topeka as advertising manager 0f the Farmer's Mail & Breeze. This was a consolidation of the old North Topeka Mail and the Kansa s Breeze, both of which the late Sen. Arthur Capper had purchased in the 1890's as the beginning of a farm press publishing venture which grew into the greatest farm press in the United States. Mr. Sweet continued through the years with The Capper Publications, Inc., and in 1940 was appointed to the present position of advertising manager.

In the third picture is a very Art Deco SilverCrest clock designed by Peter Muller Munk, who also designed early cases for Pennwood.
It is not known if this beauty went into production or not, no models have been discovered, if found it will demand a really high price.