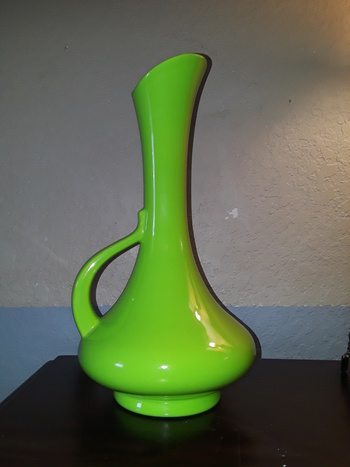 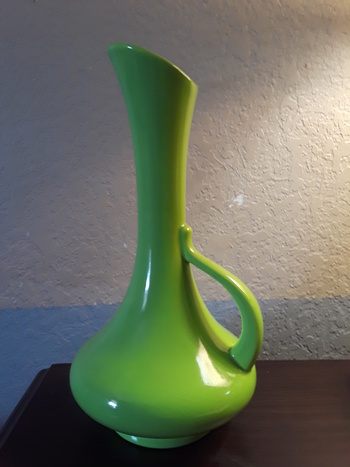 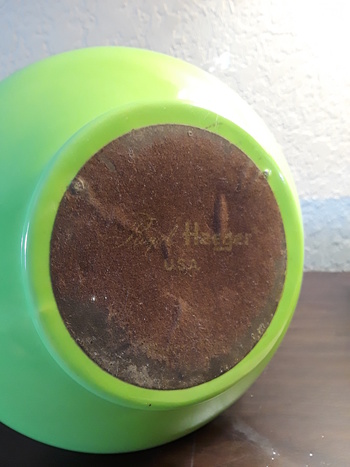 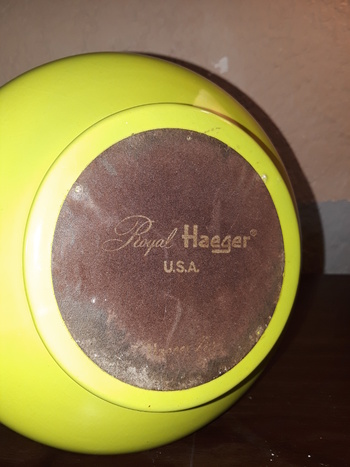 OK...so whadda ya do when confronted with a 'day off' in the middle of a long work trip, a thousand miles away from home in a city in Florida...???

"Normal people" would probably go to a beach or something, but nobody's ever accused me of being terribly "normal", so **I** made a round-robin trip of several local Goodwill stores instead <LOLOL> and this is maybe my favoritest of a few little bits and things found as 'souvenirs' to take home with me. :-) I first picked it up (and noticed the ROYAL HAEGER name on its bottom) from a shelf full of assorted vases/ceramics because of its unusual shape, then sat it back down and went on to look at a few other pieces because, frankly, the thing is friggin NEON GREEN -- not typically one of my usual colors. ;-) But by the time I'd found a couple more items and needed to go get a shopping basket, my eye kept getting drawn back to the silly thing, so into the basket it went too.

A quick look around CW shows one more similar piece that mikelv85 posted a few yrs ago, which he calls a "ewer". [I didn't know that term...?] This one is slightly larger, being about 12-1/2" tall and a little over 6" at its widest. Also unlike Mike's, mine is glazed the same color inside and out, and has a felt covered bottom with the ROYAL HAEGER U.S.A. name gilt-stamped in its center. Looks like there was something else stamped below the name (near the outer edge) which is now mostly worn off, maybe a pattern # or something? The last pic shows that a little better, though the camera flash also makes it look way too yellow, the color of the piece is much more accurate in pic#1.