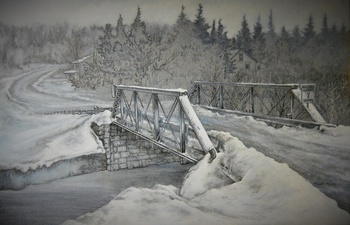 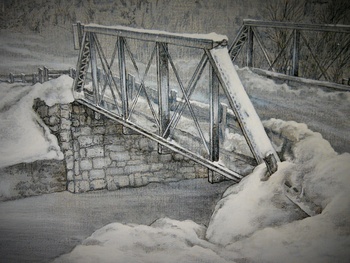 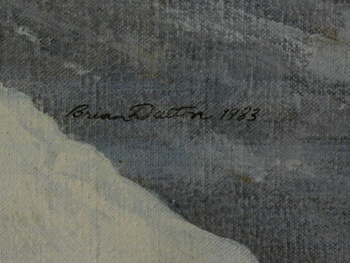 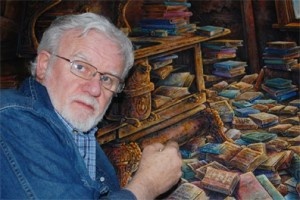 Hello Everyone.
Good Evening from Ontario.10-06-2018.
Here is another Canadian artist from Ontario, Brian Dalton, depicted an open bridge from Port Albert, very well done in oil and pen on Canvas.
This painting is 24 inches by 36 inches.

Many thanks for Looking.

If you’ve grown up in this area, it’s very possible that you’ve heard the name Brian Dalton. If you haven’t, don’t worry, now’s your chance: this talented man and his work are coming to the Minto Arts Gallery in the Carnegie Library in Harriston.
And it’s a chance you don’t want to miss. I didn’t know Brian or his work, but I feel so very fortunate to have had the opportunity to meet him.
Brian is one of those souls whose life experiences and talents are so diverse that you can’t help but be in awe of him. And the best part is that he is as unpretentious and real as a small town boy can be.
Brian Dalton was born in Goderich. He always loved drawing and he pursued this passion for 4 years at the Ontario College of Art and Design, earning a diploma in painting and drawing. Brian then continued to master his skill at the University of Guelph where he completed a Fine Art degree. From there Brian completed his Bachelor of Education at the University of Western.
With impressive credentials, Brian went on to work as a print technician at the University of Guelph for a year – a position that was created just for him. He then spent a semester instructing Life Drawing in the Fine Art department there.
After that it was off to shape the lives of the fortunate students of Norwell District Secondary School in Palmerston, where Brian worked hard to establish a strong art department, of which he was the head for most of his 27 years. And a strong department it was, with 3 full-time art teachers at one point – which is clearly a point of pride for Brian. He was also quick to sing the praises of the current head, Monika Lassner, with whom he worked for years.
Brian’s long list of accomplishments and influences don’t stop there however. An eclectic list of jobs also make up the character of this intriguing man: teaching art at the Guelph Correctional Center and the Goderich Psychiatric Hospital; mining hard-rock in Sudbury; working security at Toronto Pearson Airport; illustrating a graphic novel on the Art of the Ancient Maya for an exhibition at the Royal Ontario Museum; instructing police officers in portrait drawing for witness identification; illustrating canine anatomy texts; running individual and group classes in drawing, painting and sculpture; and even driving a taxi.
It’s no surprise that this man has such insightful and dynamic ideas – and that his work reflects this.
Those who are familiar with his work may expect to see representational pieces – landscapes in particular – which isn’t surprising considering how much of Brian’s work has focused on the rural environment where he grew up.
However, in the 8 years since he and his wife Ruth – who is a potter – have lived in Ripley and run Dalton Pottery, Brian has been able to experiment with all those things that he encouraged his students to do for years.
The exhibit will include representational work, but also what Brian calls experiments with colour. These pieces are not perception tests, and he is not trying to ‘say’ anything, but aims to create arrangements of colour which he feels heed the principles of art and design – and which he fondly calls eye candy.
Amongst his pieces Brian is going to include one that he began 20 years ago. He is still trying to perfect it in the days leading up to the exhibition. Even after it is shown however, chances are he’ll be back at it, as no piece is ever safe with him. He’ll cut canvases in half – if that’s what he feels they need.
I found Brian completely enchanting. His work exemplifies the skill of a master and his motivation that of a true thinker. He invites people to view his work through one fundamental truth: what you enjoy about it is what you bring to it.
You don’t have to understand it – or in Brian’s words – even like it. Some of it is serious, and some is eye candy – so come out prepared to indulge!
The Minto Arts Gallery sincerely invites you to Beyond the Surface: An Exhibition of Work from March 5th through April 27th at the Carnegie Library in Harriston. Artist’s Reception is March 21st from 7 to 9. Brian will also be the first guest speaker in the Arts and Culture Lecture Series April 11th from 7 to 8. The Minto Arts Council is pleased to acknowledge Harry Stone’s Pizza Burger & Ale House as the Exhibition Sponsor for Brian Dalton’s exhibition.