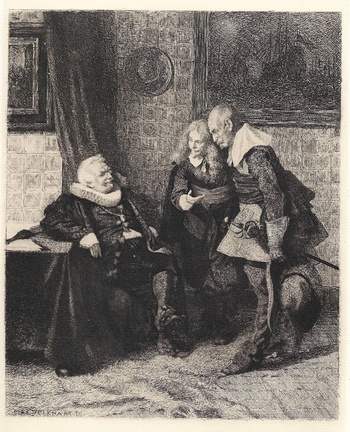 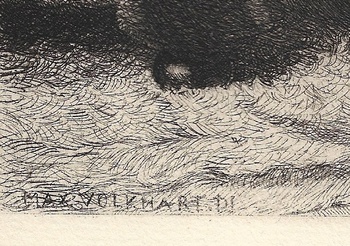 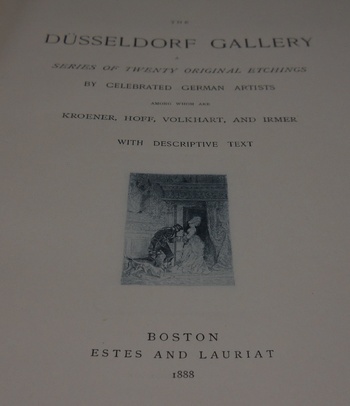 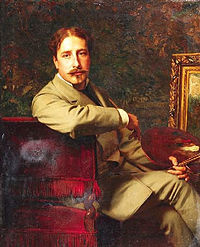 Hello Everyone.
Good Evening from Ontario,12-06-2018.
Here is post 3 of 20 from the book that a found 2 week ago from the Dusseldorf Gallery, i pick the next etching, from artist " Max Volkhart"
17-10-1848/29-3-1924, Painter & etcher. Sholar of Ed.Von Gebhards at Dusseldorf Academy. Studied in Belgium. portrait painter & Costumepieces & Interior.
His Work to be found in : Museum of Altenburg, Brussels, Dusseldorf, Mainz and Vienna.

Max Volkhart (17 October 1848, Düsseldorf - 1924, Düsseldorf) was a German genre painter and etcher; associated with the Düsseldorfer Malerschule. He was heavily influenced by the Dutch Masters and many of his works are set in the 17th and 18th centuries.
His father was the history painter Wilhelm Volkhart (de), who was his first teacher. Later, he followed his father's example and enrolled at the Kunstakademie Düsseldorf, where he studied with Heinrich Lauenstein (de), Andreas Müller and Julius Roeting, whose daughter, Anna, he would later marry. Afterwards, he took private lessons from Eduard von Gebhardt. His first major painting, "The Wounded at Gravelotte" was inspired by the Franco-Prussian War and was later acquired by Kaiser Wilhelm I.
This period was followed by an extended trip to Belgium and the Netherlands, where he focused on studies from nature. In 1881 at Rotterdam, he presented a Panorama depicting the victory of Maurice, Prince of Orange over the Spaniards at the Battle of Nieuwpoort.

In 1883, he became a member of the "Düsseldorfer Ruderverein 1880 (de)" (Rowing association), which had a boathouse in the harbor next to the Kunstakademie, and participated in numerous rowing competitions with some of his fellow artists.
He was also a member of "Malkasten (de)", a progressive artists' association that grew out of the Revolution of 1848. He participated in many of their regular festivities, which included an annual masked ball, and directed their "Doppelhochzeitsfeier" (Double wedding) in 1898.
In his later years, he apparently faded into obscurity, as the exact date of his death seems to have been unrecorded and several sources give his year of death as 1935, rather than 1924.

Glancing at this picture one might very well fancy that it is older than its author, who is less than fourty years of age. Not only the antique costume, but the tout ensemble of an old Ducth picture, are wonderfully well presented here.
The tilling of the walls and the bit of the floor which is exposed are only equaled in there exact realism by the texture of the fur robe and the heavy folds of the hanging and table cover. In examining a realism picture like this it is oftentimes curious to number the different sorts of textures which are represented, and to remember how skillful the artist must be to make all this effects with the simple means which he employs,- merely his brush and paint, And yet some stuffs are light as gossamer , and some objects are fluffy that they are seem to stand out from the surface of the canvas,- for example, the long hair on the man who is speaking here:aging, other fabrics are as heavy and thick as the richest Oriental carpets.
The good painting of stuffs and metals and the various objects which are shown in the pictures of interiors is often spoken of in a somewhat questionable manner,- as well enough in its way, but with a certain reserve which seems to relegate this art to a rather doubtful position, a little in the background.
This is easily understood when one stands before the magnificent master-piece of the world, in the landscape, figure painting, or grand historical composition. On the other hand, there is much to be said on the side of what are usually called genre pictures,- a kind of art witch may be said to have originated in the Netherlands, where it was brought to is highest perfection by a series of painters with Van Eycks in their method of representing sacred subjects, and coming down to Teniers, Metzu, Dow, and Others.
Artists of all countries have practiced genre painting in more recent time, and the most ordinary scenes of every-day life have had an artistic charm throw over them by the delicacy and sentiment with which they have been painted. All shade of emotion, from the most riotous mirth to the veriest woe, are found in these pictures; and many a smile or tear is evoked by these very human scenes from people in whom art of higher order would excite no emotion whatever.
Experience has proved that there is a human instinct: " It exact and provokes the representation of man as he is, and of life as it is, both as the eye encounter them,- citizens, Peasants, cattle, shops, tavern, rooms, streets, and landscapes.....Nature in herself, whatever she may be, whether human, animal, vegetable, or inanimate, with all her irregularities, minutiae, and omissions, is inherently right, and when comprehended, people love and delight to contemplated her.