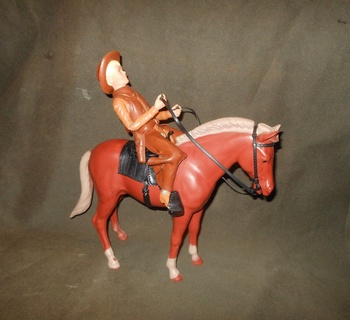 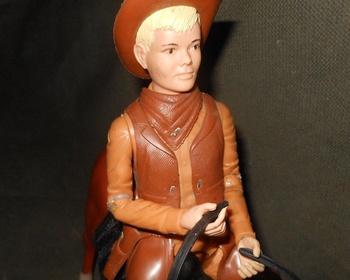 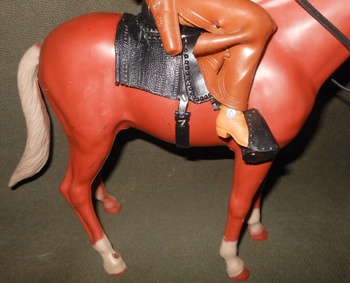 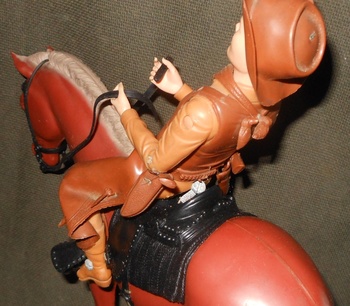 These were released in 1974 after Quaker Oats had purchased Marx Toys. They were used to advertise the Best of the West Series also known as the Johnny West line. The figures were all bolted down to the base and the accessories stapled to the figure. There were small and large store displays. This would be from a large store display that featured all or most of the figures and some horses. This figure, Jay West, would more rare then others as he is mounted on a horse. Pancho Pony being the horse.

Life was rough for a store display figure as holes were drilled in them to mount them onto the horse. There are screws in each ankle and one in the small of the back going down through the crotch into the horse. Sadly Jay's mid section gave way but he is still astride Pancho Pony. As can be seen in the photos there are staples that secure the accessories to the figure. The holster is stapled to the revolver which is goes through into the figure. The hat is stapled to the head. All the horse tack is stapled to the horse and the hore has holes in the right rear and left front hooves to attach it to the base.

Jay was missing his hands and forearms but luckily I have several spare parts so he has been rearmed. The caramel color did not age well and tend to be very brittle. Most of the other colors are durable. You can drive over them and noting happens. The caramel figures will lose arms and legs without being touched which is why a hot glue gun is a must for collectors.