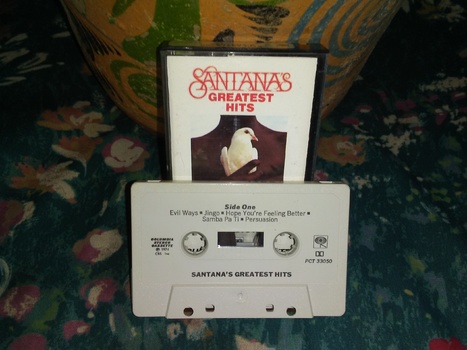 This is of course, Santana, With their Greatest Hits on cassette, released in 1974.
A Latin/Rock group, that formed in that "City By The Bay...", San Francisco, in 1966.
They became widely recognized three years later by appearing at The Woodstock Festival in '69.
This tape is chock full of their best, From 'Evil Ways' to 'Jingo'!
Later, this fairly large band parted ways and down the road, Oh what a Surprise!, Frontman, Guitar Wizard, Carlos Santana, reappeared on His own with the successful release of the Album, 'Supernatural', and a really big Hit, 'Smooth', with another frontman, Rob Thomas of the group, Matchbox 20. Have A Great Weekend CW!!