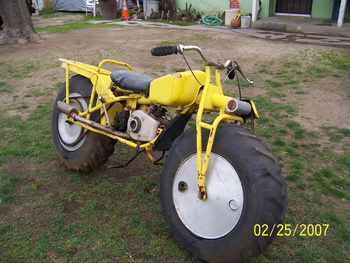 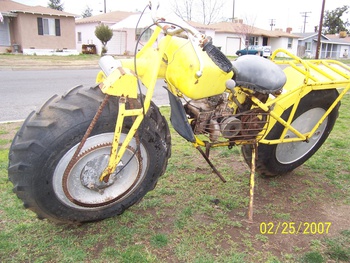 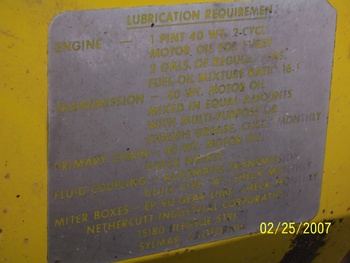 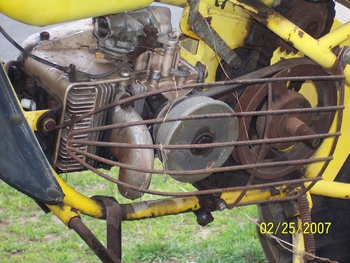 Trailbreaker by Nethercut industries. 2 Wheel Drive!! That's right, both wheels are powered. You can see the chain that drives the front wheel via a gear box powered by a drive shaft and universal joint through the frame. Back wheel is also chain driven. The wheels are actually tanks that will hold extra fuel or water. With the 15 inch wheels empty, it will float itself. 3 speed transmition with cintrifical clutch. It used to have a fluid drive similar to a torque converter but they tended to leak hot oil on the drivers leg so the factory sent this setup as a repacement. Purchased about 10 years ago from an older gentleman for $200. He later offered me $300 to sell it back to him after one of his friends found out he sold it and said he would have paid $500 for it. It was buit in Sylmar California. Produced from about 1959 to 1962 or 63. I was told mine was a 1962 by an online group and was one of 10 that they knew of. One guy in Alaska has one fully restored and has turned down $12000.00 offers for his. It runs great and is a blast to drive. You can put the front wheel up to a wall and it will literally try to climb it. A company called ROKON bought them out in early 60's and still produces them.