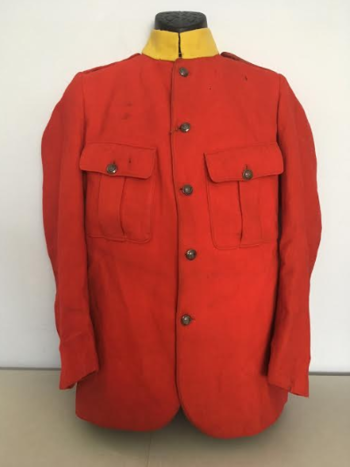 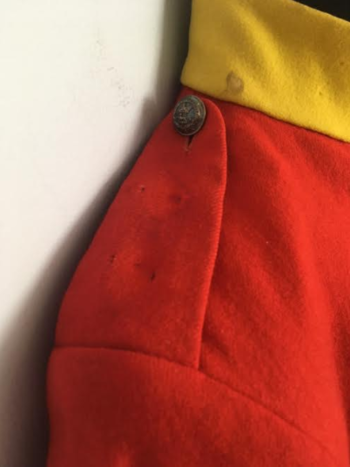 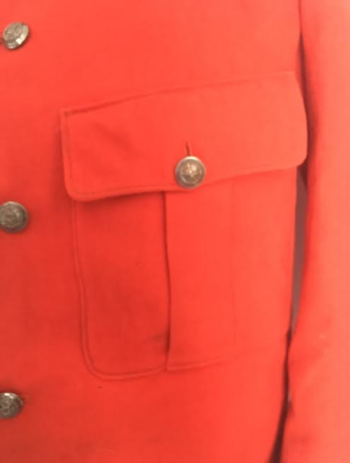 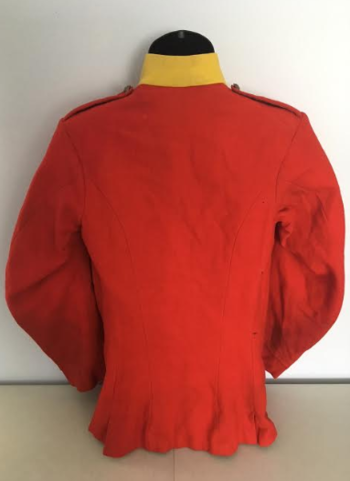 A really nice and rare scarlet patrol frock to an Officer in the Gordon Highlanders. The frock is in good condition for its age but has some service wear. The frock sports 5 silver regimental buttons down the front, 1 per pocket and 1 per shoulder. 2 upper chest pockets. Silver buttons meaning Volunteer Battalion. Shoulders have 2 holes per side, meaning rank stars/crowns would've gone there. It was either 2 rank stars, meaning full lieutenant, or 1 rank star and 1 rank crown, meaning Lieutenant Colonel. Highland Yellow Collar Facings, as used by the Gordons. No evidence of holes in the collars, so the collars never had collar badges. Nice pointed cuffs with yellow thread contrasting.

The interior is nicely lined with cotton. It has no name, but according to the seller, this uniform among with others (which I did not buy, there was a Victorian stable jacket to the 2nd Volunteer Btn. Gordons) came from the Gordon Family, along with clothing wear to John Hamilton Gordon, 1st Marquess of Aberdeen & Temair - The Earl of Aberdeen (though this uniform did not belong to him as he did not have a military career, but it likely belonged to a relative of his).

The uniform is not dated however this uniform is from the Victorian period, circa 1890s. The uniform is described in the 1891 dress regulations, the pattern being used by the "Infantry Regiments of the Line" including the Highland Regiments. A very rare pattern to find on the market, first I have seen.