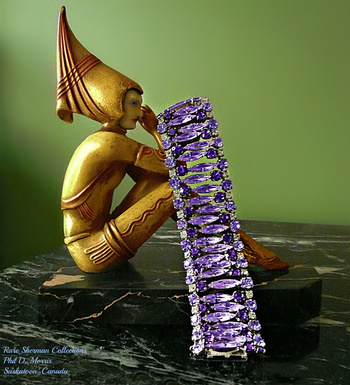 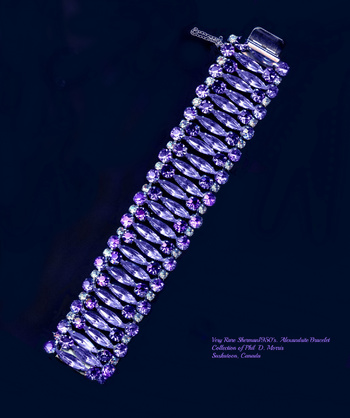 Rare, Rare, Canadian Signed Sherman Alexandrite Bracelet, 1950's, Magnifique. I had word of this sometime in March of 2018, one of Sherman's most beautiful designs. I have never seen such large marquis, navettes done in Alexandrite and I had to have it. It is the only bracelet of this design and use of Alexandrite stones known to exist !!! This raises into question how many of Sherman's designs were "one ofs". Some are so rare, just seeing a picture is as close as some of will come.

This handsome and impressive bracelet dates from the late 1950's, made by the well known Canadian firm of "Sherman" designed as an almost 1 1/2" wide bracelet featuring alternating lines large and small round shaped crystals with a marquise crystal leaf alexandrite center. The bracelet is done in a series of dazzling and intense changing Alexandrite, lilac and deep purple colors, in round shaped and marquise shaped crystals set in a rhodium plated setting. Alexandrite is a very rare (and very expensive) variety of gem-quality chrysoberyl. Although most people have probably never seen a natural alexandrite, this gemstone has replaced the traditional pearl as the modern June birthstone. Alexandrite is a birthstone for June, along with pearl and moonstone. Alexandrite is also the gem for the 55th wedding anniversary.

In accordance this astonishing bracelet was bought just over 4 weeks ago and I received it April 7th, 2018. Very few bracelets Sherman made, 2 so far, use Alexandrite stones, so aquiring this one was extremely expensive. Photographing was extremely difficult to show the changes in colour as they actually look, but I am very happy with the colors in the photo being quite accurate, for that low light !~

I have this bracelet also in clear. Alexandrite is the hardest to find, and also the only other piece I have other than the other 2 bracelets in Alexandrite I have posted previously You can see the light pink stones almost beginning to show purple. This design is actually not in the Sherman book at all, so it seems it may be the only alexandrite one that exists or known about. The large Alexandrite marquis stones are in excellent condition, considering they are not available anymore, it would be expensive if not impossible to try to replace any stones.

My favourite time to view this bracelet is indoors about 5:30 in late April when there is still light, and the stones seem to be all in shades of purple, a most astonishing bracelet !~