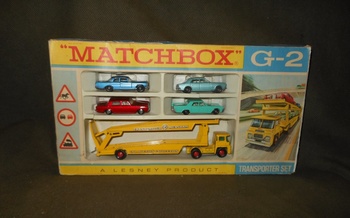 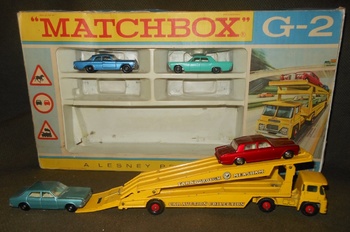 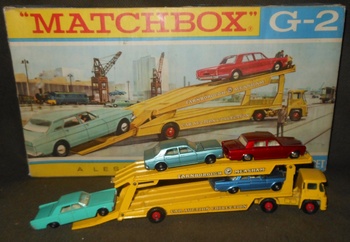 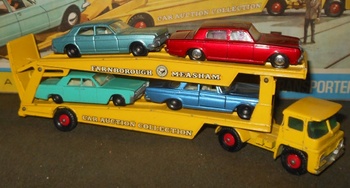 Fairly sure this is from 1968 or 1969, all the models present were made those years and the Mercedes seen last week was red in 1967. OK yes 1968 or 1969.
As far as the Gift Sets go this is a good one as it comes with King Size Car Transporter. But then the gas station set came with a gas station. And the race car set came with 10 cars including race cars. As seen in the Christmas catalogs and wished for.
The best feature is that the top lever lowers such that the cars can drive up the ramp and then raise and load the lower level. Hours of play fun or at least a few minutes.
The Car Transporter without the cars was first released as the Guy Warrior Car Transporter as M-8 in the Major Pack line in 1964. In 1967 the Major Packs line was discontinued but it lived on as K-8 in the King Size line.
The Ford Zodiac is the odd man out here as the other three are luxury cars.