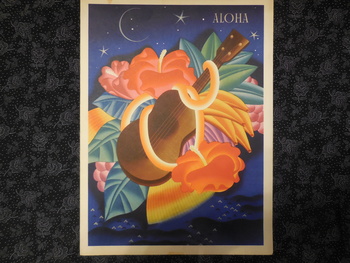 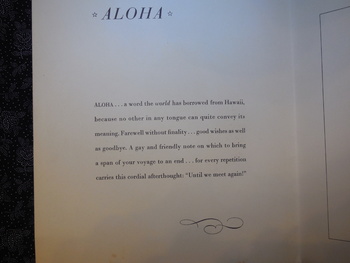 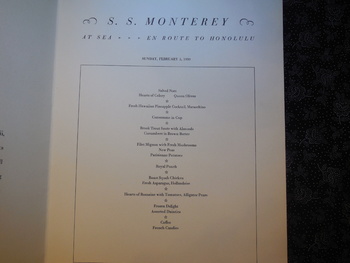 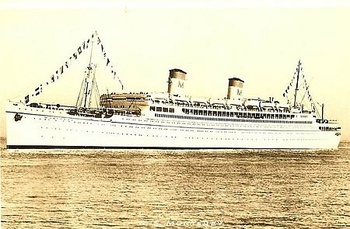 This is a Flea Market find, from 2 weeks ago on 7/7/2018, it's a Ships Menu from the S.S. Monterey dated February 5, 1939.
The Menu cover has a great Art Deco image of a Ukulele, and Flowers in a Starlit Sky, with ALOHA in the upper right corner. On the inside of the cover, it reads:
* ALOHA * then, ALOHA . . . a word the world has borrowed from Hawaii, because no other in any tongue can quite convey it's meaning. Farewell without finality . . . good wishes as well as goodbye. A gay and friendly note on which to bring a span of your voyage to an end . . . for every repetition carries this cordial afterthought "Until we meet again"
The inside page, is the Menu and reads S. S. M O N T E R E Y over AT SEA > > > EN ROUTE TO HONOLULU over Sunday, February 5, 1939 then the menu:
Salted Nuts Hearts of Celery Queen Olives * Fresh Hawaiian Pineapple Cocktail, Maraschino * Consomme in Cup * Brook Trout Saute' with Almonds Cucumbers in Brown Butter * Fillet Mignon with Fresh Mushrooms New Peas Parisienne Potatoes * Royal Punch * Roast Squab Chicken Fresh Asparagus, Hollandaise * Hearts of Romain with Tomatoes, Alligator Pears * Frozen Delight Assorted Dainties * Coffee French Candies

The first photo is the Menu cover, then inside cover, then Menu page, and the last is from Wikipedia the S.S. Monterey.
The Cruise Ship was owned by Matson Lines, built in 1932 at Bethlehem Ship Yard, with the maiden voyage in 1932 from San Francisco, California to Honolulu, Hawaii, to promote travel cruises to Hawaii, and the South Seas. The Ship was put into Service after the Bombing of Pearl Harbor for Troop Transport, after WWII it went through several name changes, and in 2000, it sunk 50 miles off the Coast of South Africa, after taking on water, while under tow.

Thank you for looking, I'll post a link to the S.S. Monterey, on Wikipedia in comments, for more information, all comments are welcome! :^) 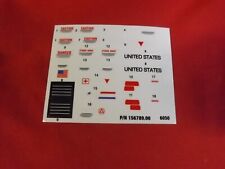 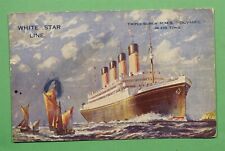