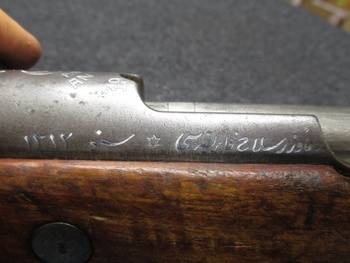 The Turkish 1893 Mauser was produced by the Mauser factory in Oberndorf, Germany as part of a contract with the Imperial Ottoman government, hence the Arabic markings. It was originally produced in 7.63x55 mm, but in the 1930s the Turkish government standardized their disparate stockpile of rifles to the 7.92x57 mm (8 mm) cartridge. This rifle was among those converted. Note that the receiver has been milled to accept the longer 8 mm round. This is an all matching serial number rifle. It is a bolt action internal magazine fed action which can be loaded using a 5 round stripper clip or with single rounds, by hand. Since this rifle was manufactured before 1898, the Bureau of Alcohol, Tobacco and Firearms considers it an antique, so anyone may purchase one of these without filling out andy Federal paperwork.