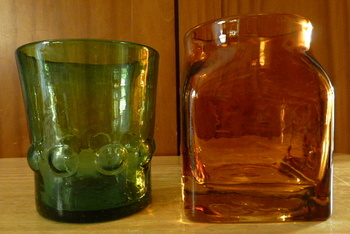 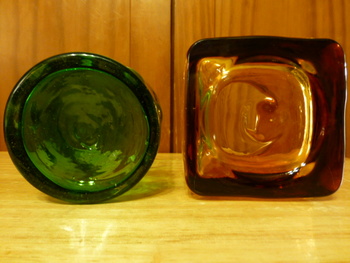 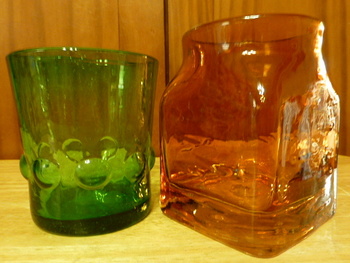 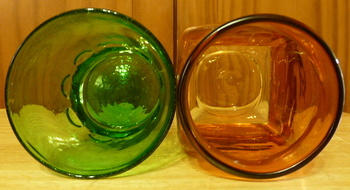 I found both of these pieces today in different thrift shops in Bloomington and Champaign, IL. The glass is 4" high and the vase is 4.5" high. Both have hot worked pontils, but the vase also has a symmetrical circular depression in the bottom which the pontil sits in. The vase has several raised lines on all four sides parallel to the top and bottom. Both screamed "Blenko!" at me as soon as I picked them up, but I can't find them on Blenko's site or on ebay, though at one time Blenko made a drinking glass that had bumps all over it, not just in a row around the bottom. I've only looked at about 400 of the 4,000 images of Blenko glass items on ebay though, so one or both may be there. Is anyone familiar with these pieces? Calling them Blenko until I can identify the maker.

I found out I was snookered on the vase. I put it back in to soak in soapy water and noticed the finish looked rough in one place and I was able to scratch it with my fingernail. Using a stainless scrubbing pad, I was able to remove the brown finish down to the clear glass. This finish was applied at the factory, I am pretty certain. I think, though, unfortunately, if I had found it without the finish, it still might have screamed "Blenko" at me. This is one reason I stopped collecting glass 10 or 12 years ago. Too much good glass and copies of old glass was coming into the country and I was losing the ability to distinguish between this glass and American glass. It is still a nice piece of glass, heavy, hand made, nice glass. I still believe the drinking glass to be made by Blenko, though. The good thing that came out of this is that in wading through hundreds of images on ebay, I found a small crackle jug with the Rainbow Glass label on it. I have been trying to identify the maker of these jugs for several years.