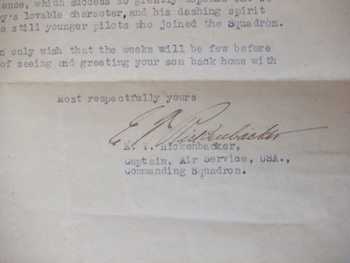 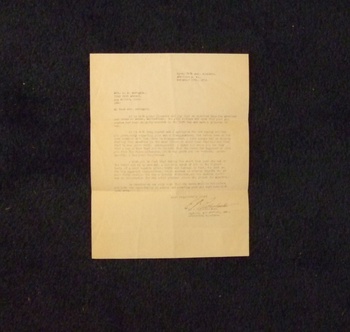 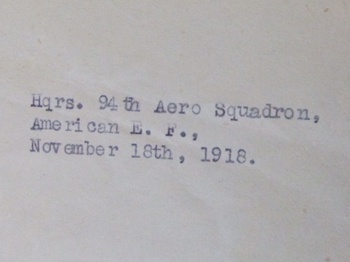 My dear Mrs. Scroggie:
It is with great pleasure and joy that we received from the American Red Cross at Berne, Switzerland, the glad tidings and news that your son, Eugene had been slightly wounded in the left leg and made a prisoner of war.
It is with deep regret and I apologize for not having written you previously regarding your son’s disappearance, but having been on the same mission with him, when he disappeared, I have always had an uncanny feeling that sometime in the near future we would hear from him and find that he was quiet well; consequently, I dared not write you for fear that I may either lead you to believe that the worst had happened or give you food for false allusions, which may prove out the reverse. Consequently, I beg your forgiveness.
I wish you to feel that during the short time your son was on the front and in my command, I can only speak of him in the highest terms of a most capable pilot, brave and daring; in fact, too much so, for his apparent inexperience, which success so greatly depends on. We most fully realize the boy’s loveable character, and his dashing spirit was an inspiration for the still younger pilots who joined the squadron.
In conclusion can only wish that the weeks will be few before you have the opportunity of seeing and greeting your son back home with open arms.
Most respectfully yours

Captain Eddie Rickenbacker is one of the most well known figures in early aviation. He was awarded the Medal of Honor and seven Distinguished Service Crosses (DSC) for his WW1 service. He was an ace several times over with 26 confirmed aerial victories. Post war, he continued in aviation and was the owner and President of Eastern Air Lines. He was a very prolific signer and his post war Eastern Air Lines material is readily available. WW1 era signatures are much harder to find.

The subject of the letter, First LT Eugene Scroggie, is credited with one aerial victory on September 27th, 1918. He was shot down on October 3rd, 1918 and received a bullet wound to the foot.

Interestingly in his memoirs (Fighting the Flying Circus), Eddie Rickenbacker confirms the circumstances of writing this EXACT letter: "Avery, as well as Eugene Scroggie, one of my pilots from Des Moines, Iowa, were missing. I had seen one Spad fall but could not tell which of these pilots was in it. But in spite of this uncertainty I felt so confident that both pilots were not dead but merely prisoners that I put off writing to their parents for weeks. At the cessation of hostilities both of these boys were turned back to us by Germany."

Rarely is it possible to so completely document a piece of history.