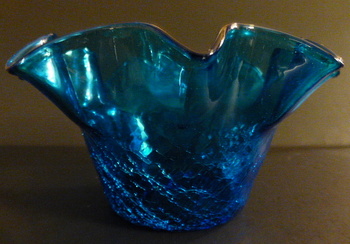 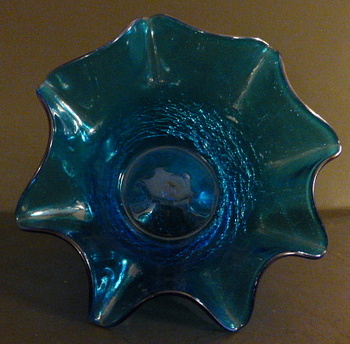 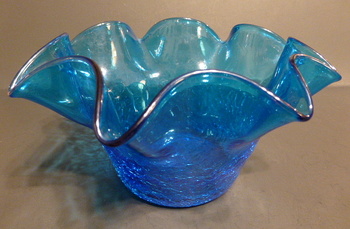 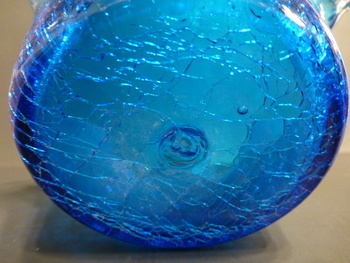 This bowl is about 4" high and about 8" across at the top. I am pretty certain that this was made by the Rainbow Art Glass Company for two reasons. First, the pontil is very similar to those on several labeled Rainbow pieces that I have seen. Second, several labeled ruffled crackle pieces are similar in that the crackling does not extend into the ruffles. I think the blue is similar to labeled Rainbow pieces, too, but it is hard to be certain of that when working only with images from various sources. I don't think I have a blue piece in my collection to compare it to. This was a $1.99 thrift shop find today. It is a pretty deep blue and the first two images capture the color best, but I had to put some bright light on it to get an image of the pontil, so the blue is diluted in the last two images. I was happy to find this today. It is in mint condition. I will mark it a mystery in case someone disagrees with my assessment.

The Rainbow Art Glass Co. was established in Huntington, West Virginia in 1954. In 1973 they were purchased as a subsidiary by Viking Glass. The factory burned in 1983 and Rainbow Art Glass ceased operations forever.

Rainbow’s glass forms were often hand blown and came in a range of vibrant colors and wild designs popular at the time. Collectors search for Rainbow decanters, figurines and crackle glass.

Rainbow glass can sometimes be identified by the distinct styles of their stoppers, flat collar bottlenecks, and lined impressions on the pontil mark