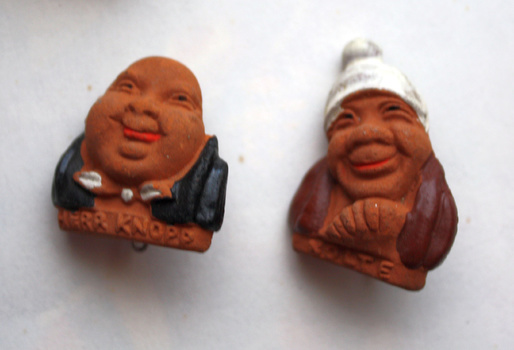 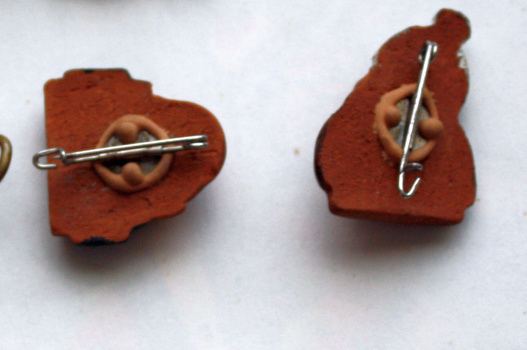 From internet:
The Winterhilfswerk (WHW) was an annual drive by the Nationalsozialistische Volkswohlfahrt (the National Socialist People’s Welfare Organization) to help finance charitable work. Its slogan was "None shall starve nor freeze". It ran from 1933-1945 and was designed to provide food and fuel to Germans. The Hitlerjugend and Bund Deutscher Mädel (boys' and girls' associations, respectively) were extremely active in collecting for this charity. Donors were often given small souvenir gratitude gifts of negligible value, somewhat similar to the way modern charities mail out address labels and holiday cards. A typical such gift was a very small propaganda booklet, reminiscent of Victorian-era miniature books; about 0.8" wide x 1.5" tall. More generous donors would receive concomitantly better gifts, such as lapel pins on a wide variety of themes. Some depicting occupational types or geographic areas of the Reich, others animals, birds and insects, nursery rhyme and fairy tale characters, or notable persons from German history (including of course Adolf Hitler himself). They were made from a variety of materials. Each individual miniature book, badge, badge set or toy set was only available for two or three days of a particular collection drive. So the populace would be encouraged to donate the following week and thereby collect the latest in the series. There could also be very annoying consequences; nagging by the appropriate official if your local Blockleiter saw that you were not wearing the current, appropriate pin by about Tuesday of the week. When he visited Germany in 1939 as a reporter for the North American Newspaper Alliance Dr. Lothrop Stoddard wrote: "...Once a fortnight, every city, town, and village in the Reich seethes with brown-shirted Storm Troopers carrying red-painted canisters. These are the Winter-Help collection-boxes. The Brown-Shirts go everywhere. You cannot sit in a restaurant or beer-hall but what, sooner or later, a pair of them will work through the place, rattling their canisters ostentatiously in the faces of customers. And I never saw a German formally refuse to drop in his mite, even though the contribution might have been less than the equivalent of one American cent. During these periodic money-raising campaigns, all sorts of dodges are employed. On busy street-corners comedians, singers, musicians, sailors, gather a crowd by some amusing skit, at the close of which the Brown-Shirts collect. People buy tiny badges to show they have contributed—badges good only for that particular campaign. One time they may be an artificial flower; next time a miniature dagger, and so forth. The Winter-Help campaign series reaches its climax shortly before Christmas in the so-called Day of National Solidarity. On that notable occasion the Big Guns of the Nazi Party sally forth with their collection-boxes to do their bit."
Collection drives were a mainstay of the Winter Relief, and those who did not give, or gave little (such as one pair of boots to a clothing drive), were sometimes the victims of mob violence and needed to be protected by the police.
Similar initiatives were started in countries in German-occupied Europe, known in French as the Secours d'Hiver in Belgium and in Dutch as the Winterhulp Nederland and Winterhulp België.