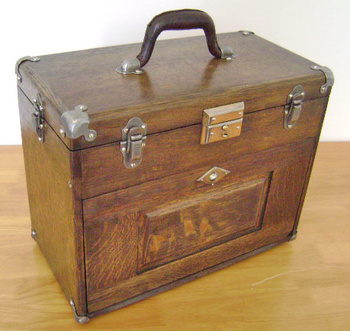 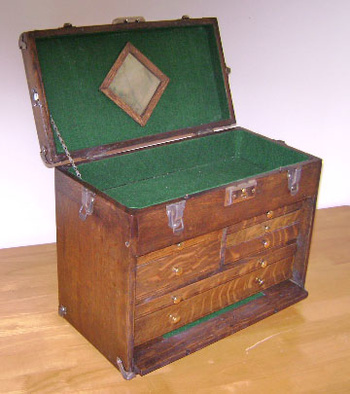 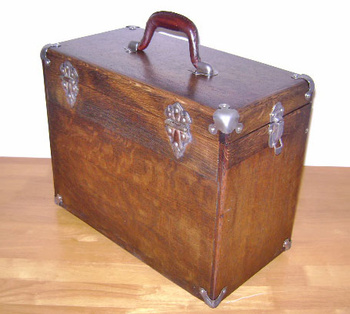 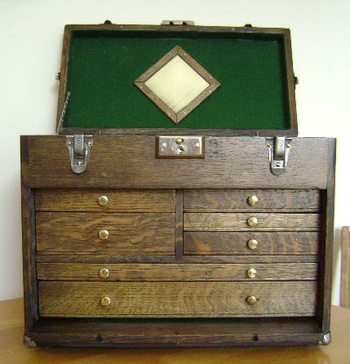 I recently acquired a Gerstner all OAK #O41 that I had never seen before. It has the rectangular lid lock and the diamond finger pull on the relieved face panel. Its Hardware Period Date would be 1921 – 1925.
The 1st all oak Gerstner ‘chest’ was their Style #O41, O41A, O41B and O41C released in their 1927 brochure. It is shown with a clasp lid lock and must have had the rounded panel finger pull like the leatherette ones. No oak chests are shown in their 1926 Hardware Poster that I own.
However, Chandler & Farquhar Co., Boston, Mass., Machinist Tools and Supplies, published their copyrighted 1924 Catalog B, which I own. It states in the Gerstner Style #41 write-up - ‘Also made in quartered oak finish, not covered, at the same price. When ordering this, designate O41, O41A, O41B or O41C.’ The pic, or cut, shows the rectangular lid lock.
This #O41 is another example of a Gerstner ‘Market Test Chest’. Perhaps it was originally purchased through Chandler & Farquhar. Its actual Period Date would be 1924 – 1925.
Terry Rushbrook did the refinishing work for me, leaving its character and patina. He did put in new Gerstner felt.
Have a good one……Ted