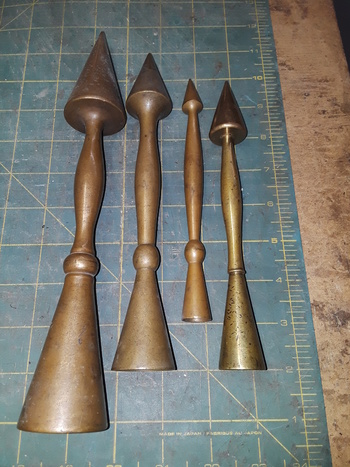 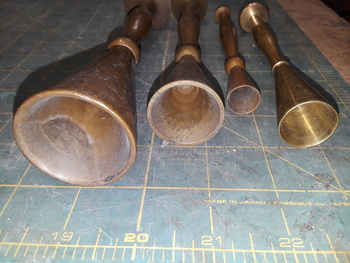 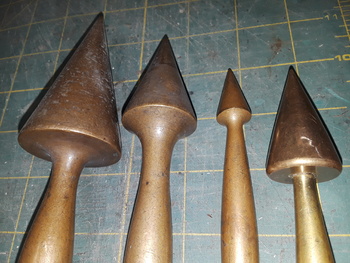 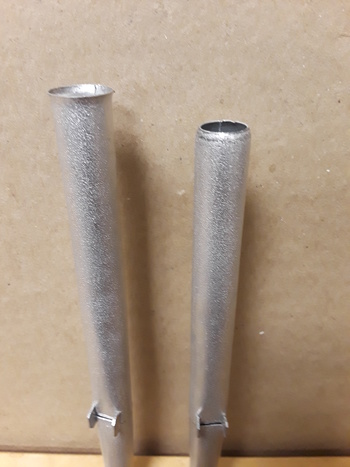 Here are a few of my probably most *unusual tools* -- bearing in mind that I tend to enjoy collecting 'old tools' in general, these could qualify as some of my most obscure in that, if nothing else, I wouldn't have the slightest clue what they actually ARE (nor how old they are) if they weren't directly related to my specific career (itself likely considered obscure by many people) as a pipe organ technician/tuner. [and I daresay precious few other people in the world would know either, though it'd probably be fun to hear folks' guesses?? <lol>] These are 4 sizes/examples of what's called a "tuning cone". Their sizes range from roughly 6" - 10" long (they are pictured on a mat with 1sq.in. grid) and are made of solid brass, each has a 'point' at one end and a 'cup' at the other, with a 'handle' in between.

Tools such as these used to be (still are, sometimes) commonly used to slightly 'cone in' or 'flare out' the very top edges of individual small organ pipes in order to fine-tune their exact playing pitch. (which I've done to a couple of junk pipes in the last photo, to help explain what I'm talking about) Opening a pipe makes it play slightly "sharper" while closing it makes it go a bit "flatter", in much the same way as tightening/loosening a guitar string does, for instance. Since typical small organ pipes like this are usually made of a very soft largely lead metal alloy, these relatively heavy (for their size) brass cups/cones are easily capable of making very minute (often not actually visible, but certainly *audible*?!) adjustments to the "tuning" of each pipe by carefully dropping the appropriate end of the tool into/onto the pipe needing tuned a few times -- thus effectively opening or closing it a wee bit more. This method of tuning small organ pipes was nearly universal into the 1920's or so, when other (much less potentially 'destructive' if not done correctly) means came into more common practice, though 'cone tuning' is still used to this day in some applications.

These particular tools came to me several years ago when I purchased (part of) a storage locker holding the last parts of the estate of a gentleman who had also been a pipe organ tuner (I think?) or at least a pipe organ 'hobbyist'. Of the numerous truckloads of assorted pipes/parts/yada yada we hauled away from there, the REAL PRIZE (to me) was the small boxful of 'old organ brass' (containing at least 3 of these 4 as well as more related tools) which I eventually discovered in a haphazard pile of other crap. (and quickly liberated to the cab of my truck!!) Frankly, I would have bought that box alone for the same price, but hey -- seller didn't need to know that, he just wanted the locker cleared out?! <lol>

It is thus highly likely that these exact tools were *indeed* first (made and) used in the mid-latter 1800's by somebody, somewhere -- and that I am now just the most current in an unknown (to me) line of "previous owners" who have kept them in their own toolboxes as I now do -- it IS in fact reasonably common for specialty tools such as these to end up getting 'passed down' thru the generations (one way or the other) in our trade. It is also entirely possible that they could have actually originated in Europe somewhere way-back-then, as early American 'pipe organ history' (like general American history) often had European 'roots'.

There were also other assorted cool 'antique tools' in the whole lot as it turned out, I'll try to show a few more of them too, in coming days...