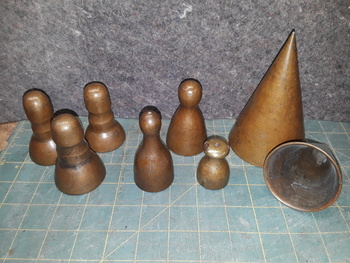 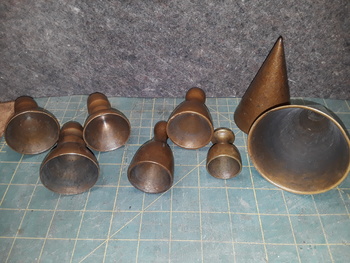 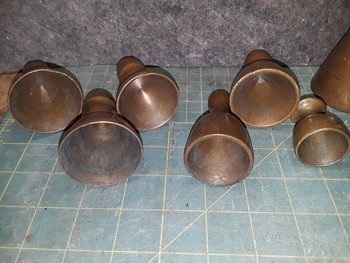 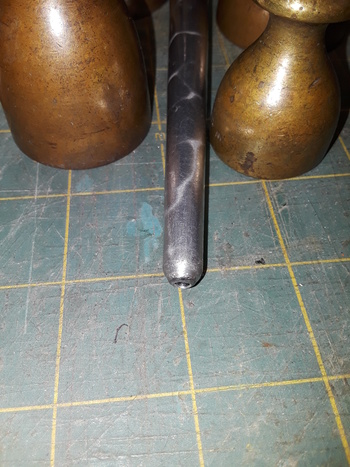 Please see yesterday's post of related tools for the backstory -- I don't wanna type all that again...? ;-) :-)

Here's another handful of my antique work tools. Most of these (all the ones on the LH side of pics) are what we call "toe cones", in that they are intended to be used to make/adjust the pointy bottom ends (a.k.a. "toes") of organ pipes. (vs. the tuning cones, meant to adjust their top ends) The last pic included here shows the toe of a typical little pipe -- that small hole in it is just as critical (actually moreso) than the top opening for the end result of the musical note that any individual pipe 'plays' and is what these tools are used to adjust/close, by carefully knocking the cone against the bottom of the pipe. (other awl-like tools are used, should the hole need slightly enlarged instead)

Unlike the tuning cones, these tools aren't so often used in the field, more usually being found in the shop -- specifically the 'pipe shop' (or 'voicing room') where organ pipes are crafted in the first place. The 3 cones seen on the LH side here are particularly notable as a set (with differing tapers inside each, though their exteriors are mostly the same) which can be used (in turn) to first form the overall pointy shape of the pipe toes.

The three in the middle don't match, but are meant to perform the same general function. The smallest one of them is probably the most unusual due to its relatively tiny size/weight. [which also makes it particularly useful from time to time...when one is dealing with tiny pipes, one needs tiny tools...?]

The two larger cones on the RH side are the exceptions to the rest shown here, being normally used for various shaping/rounding tasks while pipes are being made and voiced.

Like the tuning cones, these tools are all made of solid brass, and I am no doubt only the current in a probably long series of 'former owners'. Gotta say that there *is* rather an interesting feeling of satisfaction when using these tools, with the thought of all those artist/craftsmen who have come before me -- all (including myself) simply endeavoring to create beautiful musical instruments. It's a pretty *good* feeling, actually... ;-) :-) :-) :-)