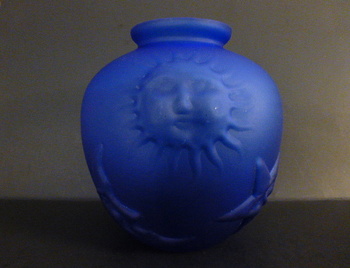 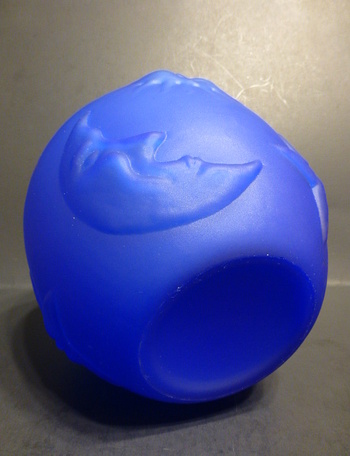 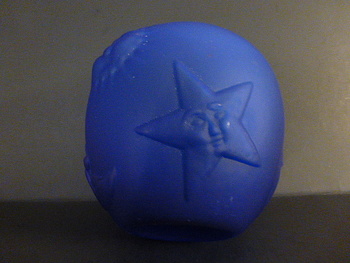 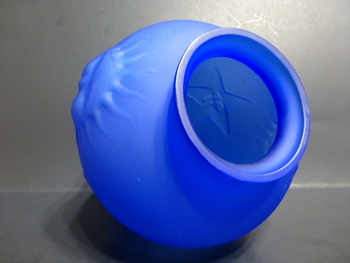 This fish bowl shaped vase measures about 7.25" high x about 6.5" wide at its widest point. This was at a local thrift shop for several weeks in their kitchenware room marked at $1.99. I immediately thought of the Phoenix/Consolidated glassware vases of the 1930s when I saw it, but passed on it as some of the folks who work there are pretty knowledgeable and tend to price things a bit high. I have found a few good deals there, though. I spent quite a bit of time trying to find something similar, but failed. Last night I decided that I would go ahead and buy it, so that was my mission for today. The sun, moon and star theme is repeated on opposite sides of the vase. It has a matte finish which appears to be fairly easily scuffed and it has some scars. There is a vague suggestion of a pontil when I run my hands over it, but it is not really visible. The top is ground flat. Not sure what I have here. I am still searching. I may try to re-photograph it in brighter light as it is hard to get good images of in the light I used.

I redid photographed this vase. Images 1 and 3 are close to the true color and images 2 and 4 are washed out due to the bright light that I used. The bright light does show more detail, so it is a trade off. The sun figure is a bit more detailed than my first image shows.

I later found another version of this on ebay in a tall narrow yellow vase. Definitely same maker. Seller didn't know who made it. They thought it was Bohemian glass.

As noted below, I discovered that this, and similar vases, were made for Two's Company Inc., of Mt. Vernon, NY between 1969 and 2006 when the company relocated. This is based on the label found on one example of this vase.