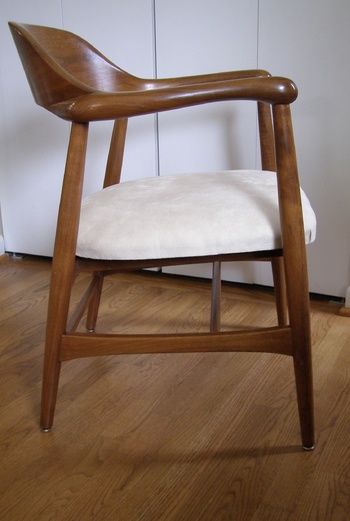 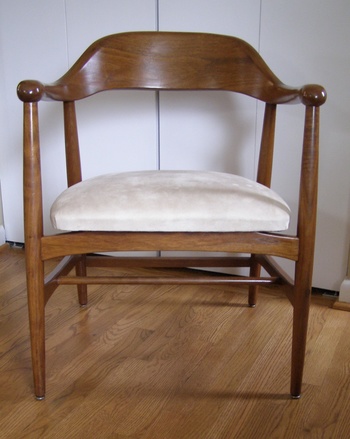 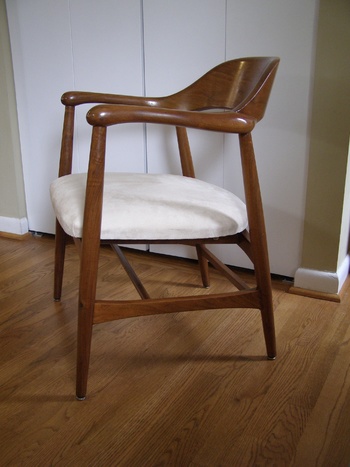 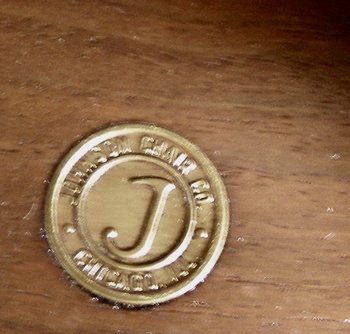 I bought 3 of these chairs several years ago along with a formica wood grain table ( which was what I went to buy for my daughter’s first apartment, Paid $25 and chairs were included). The chairs were of exceptional quality, I believe solid walnut, with a teak coloured stain, popular in the 1950-60’s to mimic the teak from Scandinavian designers. The arms and back connected by wooden pegs (tenons), much like furniture of the Arts & Craft period. The wood still has the original finish, plus a few cat scratches on the wood underneath!
The profile reminds me of the famous Hans Wegner chair used by CBS in 1960 for the JFK/Nixon debate. All the wood is in original condition with the original metal floor glides, still intact. There is an embossed brass button bearing the Johnson Chair Company’s logo. The seat has a solid wood frame and hand-tied springs.
While researching this chair, I discovered that the Johnson Chair Company had an exhibit at the 1893 Chicago World's Fair, made chairs for the US House and Senate in 1899, and survived the Great Chicago Fire, the Great Depression, and two World Wars!! The company was eventually sold to the Gunlocke furniture company of New York state around 1975, who continued producing under the Johnson name until the late 1970’s
I have, in recent years, reupholstered the seats, as shown, as they had 1980’s fabric in navy with tiny pink tulips! I sold two of the chairs, and kept one for our home, which I love, especially the woodgrain on the back