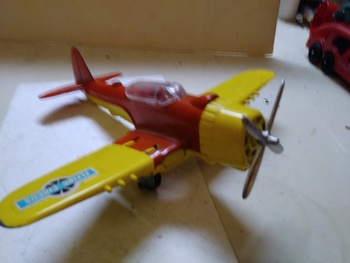 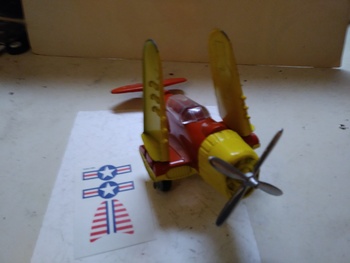 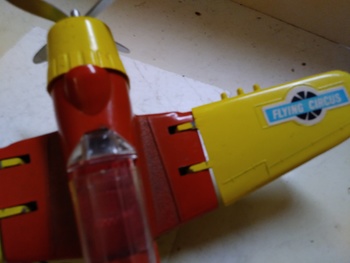 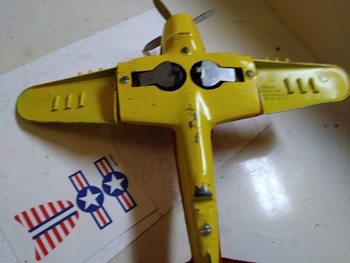 I just picked up this Hubley Flying Circus aircraft. This plane was made as a Navy Fighter in different color combos from 1956-65. I had one in the early sixties in dk blue/lt blue/red colors. It was a rugged toy(a Hubley trademark) that survived many crashlandings on dirt, floor and even concrete "flat tops". I loved WW II naval aircraft, the Monogram 1/48 navy series were some of my favorite models. Ftapache shared a Kingfisher from this group.
I know of no actual aircraft that it was based on, it kind of looks like a bubble top p-47 with stubby wings and rounded wingtips. The 10,000 lb Thunderbolt would have made an impractical carrier fighter IMO. If you were ever actually able to launch it, you'd have to repair the flight deck after each landing!
There is no info on this Flying Circus version in my Hubley book which is pretty good at listing things. I've seen a #467 with the same markings/colors before, so maybe it came in a set not listed. The #467 loosely resembles a Brewster Buffalo and was offered as a naval aircraft with folding wings also. The Buffalo(aptly named) was a lousy ground based fighter and probably couldn't make it off a carrier to crash land on recovery. Both of these Flying Circus aircraft were armed, must of been a tough crowd!
It has folding wings, a sliding canopy and retractable landing gear. I got a good deal on it and plan to put in a #500 series painted blue and silver. It didn't come with a prop, but I got such a great deal on the plane that I was able to pick up a replacement prop and correct decal set for my project and come out relatively unscathed.
If anybody knows anything about the Hubley Flying Circus planes, please comment on dates, sets etc.
Thanks for stopping by,
Toyrebel over and out