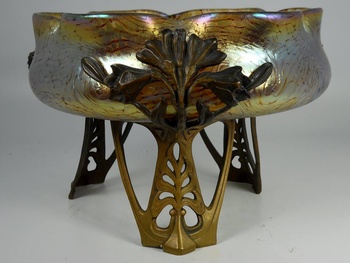 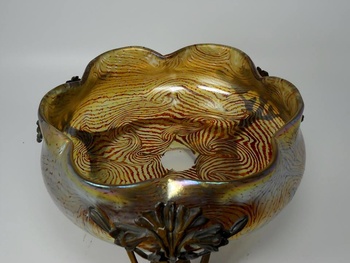 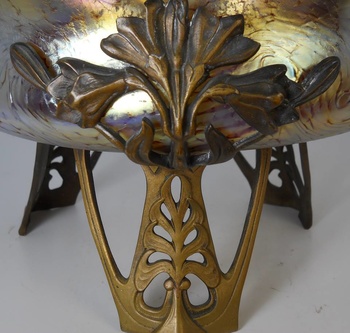 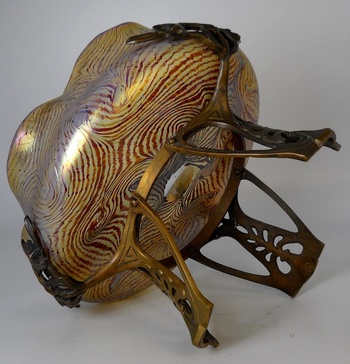 Hello Everyone.
Here is my last acquisition in my Fritz Heckert Family, a beautiful Design by Otto Thamm from the 1900, a very bright Gold iridescent with exceptional Red swirls threading, a beautiful decor, that I wish to find more in near future.
No marking on Bronze mount, very Art Nouveau all the way.

I WANT TO SAY A GRATEFUL THANK YOU TO ALL MY FRIENDS THAT COMMENTED ON MY "LITTLE NIGHTMARE" POST, THOSE PRAYER AND GOOD WORDS, HELP ME A LOT TO GET BACK ON MY FEET AND REBUILD MY CONFIDENT.
KIND REGARDS
ALAN

Life
Fritz Heckert was born in 1837 as the eighth son of the master glazier Johann Andreas Heckert (1789-1852) in Halle an der Saale. Of the nine siblings, seven worked in the glass industry. After the death of his father he went to Berlin to his brother Carl Ferdinand at the age of 15. There he learned the trade of a merchant and designated himself from 1863 as a manufacturer. In 1862 he acquired a glass grinding mill, the so-called rock mill on the Zacken near Petersdorf on the edge of the Giant Mountains; In 1866 he founded his glass refinery in Petersdorf, which he could expand to a major glass refining company with at times 200 employees, which also had a glassworks from 1889 onwards. Fritz Heckert died in 1887.

Glass production
His widow, then a son-in-law and from 1905 son Bruno Heckert continued the company. In 1910, Heinrich von Loesch, chamberlain and manor owner on Kammerswaldau, acquired the Heckert company. It traded from 1911 as Fritz Heckert - Petersdorfer Glashütte KG. 1918 bought the Josephinenhütte the realm count Schaffgotsch from the neighboring Schreiberhau the Heckert company. In addition, a merger was formed with the glass company Neumann and Staebe from Hermsdorf / Kynast. Until 1925 they existed under the name Jo-He-Ky as a limited partnership and then the Heckert company went into the Josephinenhütte AG Petersdorf, which existed until 1945. After the end of the Second World War, production continued in Szklarska Por?ba and Piechowice. The still remaining German masters formed a new tribe of Polish skilled workers. In 1958, the Josephinenhütte was renamed "Huta Julia". The glassworks in Szklarska Por?ba was shut down in 2000. Thus, the Glashütte in Piechowice (Petersdorf) is the only surviving monument of the Josephinenhütte including the Heckert glass refinery and the old famous glass tradition of the Silesian Giant Mountains.