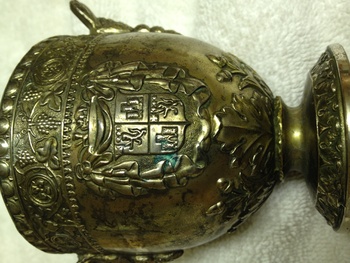 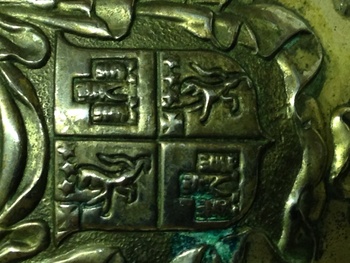 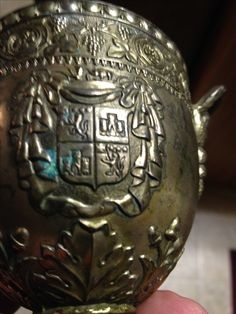 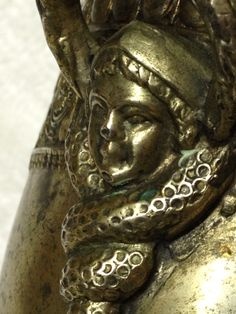 I found this old 5 and 1/2 by 3and 1/2 goblet at the flea market. It was created to tell an ancient Christian Roman story. The cup’s description tells the story in detail according to history. The top of the cup is surrounded by a prosperous vine which intertwines two coats of arms from the old kingdoms describing two Kings that came together under the Roman Empire whom fought for a Christian cause as depicted by the Roman Christian shield. The white cloth around the shield symbolizes a noble cause which was awarded to the two kings for their under taking. Their historic achievements is detailed at the top of the shield explaining their campaign which extended all the way to the Far East where they out smarted and captured the elephant in war. For their courageous victory they were awarded the name of The Fox. The emblem siting on top of the shield describes a fox who captured an elephant and is taking him back to Rome on a barge as proof of their victory. Since they were fighting under The Roman Empire, the shield should have had the wreath with the SPQR initials which proclaims the  senate and people of Rome as being victorious in their campaign. Instead the shield now carries new inscribed information pertaining to the Fox. The inscription describes two castles as working together whom considered themselves being descendants of the Fox. These two castles shared the same coat of arms. The top portion of the shield shows the primary castle. To the left you see a fox and above the fox are three Christian stars. The stars are representations of the organization's past contributions to the first, second, and third crusades. These stars are fallowed by a Templar's flag representing the organization they belong to. The lower left portion of the shield shows the secondary castle. On the right side of the castle is a different but similar kind of fox and above it are the three stars plus the Templar's flag indicating that they both were of the same military order. In fact this cup brings the history of the old and the new fox together. History recognizes theses two castles to have existed in Scotland in the 13 century. two castle were recognized as chartered castles and were not considered part of Scotland's military. The primary castle was Dumfries and the secondary castle was Carlaverock. They were both six miles apart. Their primary mission was to protect the catholic Christians and their monasteries from robbers in the southern part of Scotland. Their secondary mission was to protect the south trading port and trading routes because they were involved in trading themselves. The handles were also an addition to third part of another story that describes the six year old Norwegian princess Margaret granddaughter of King Alexander whom with the approval of the pope was elected as the Queen of Scotland in 1289. Very rare cup? but the question is who made it? And when