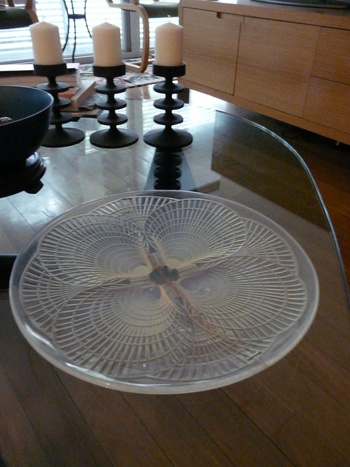 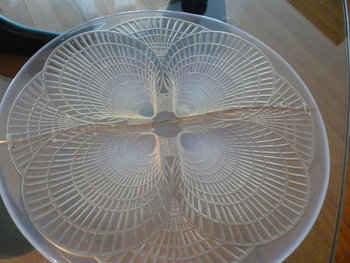 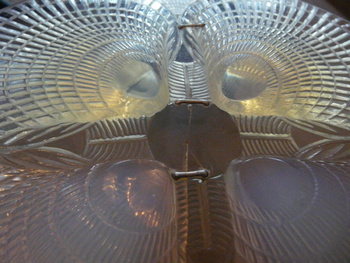 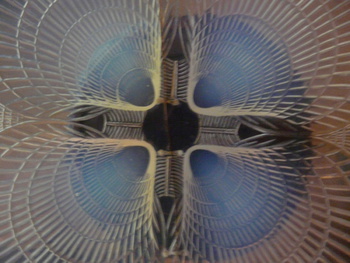 I found this dish/charger in a Salvation Army opprtunity shop about three months ago for a dollar.
In Australia these stores are known as the "Salvos".
I once owned a large bowl in the clear version of this pattern, so I was familiar with the shape. What surprised me was that it was one of the opalescent variety. So my heart was a-pumping when I saw it only to be rudely calmed by the sight of those "ugly metal staples"!
The last time I had seen staples in glass was thirty years ago in Tiffany Favrile bowl with trailed vine leaves. The staples were in the foot that had been badly glued together. It's still in the hands of my partner of that time. We had had it professionally restored and it was well worth the effort.
But STAPLES!
Why did they do it? And then I realized that in those days (?) it was what you did with an object that you wanted to keep .... it was still meaningful to them.
In Australia this type of work was done by "gypsies". It is actually very clever work in itself. The glass was drilled from below for the majority of the staples (6) and from above to anchor it all in place at each edge. Eight ugly staples.
Most of the signature is actually hidden by the staples in the centre of the plate. But to one edge you can make out from above: R. ------E.
A dealer friend of mine said that early in his career he had the idea of only collecting repaired pieces.
It may well be worthless but it is still functional and placed properly it can be difficult to see that crack right across the beautiful A/F charger.