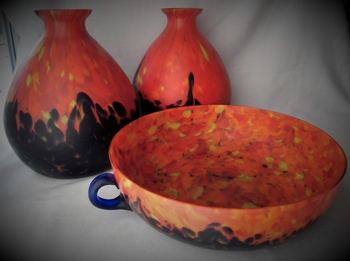 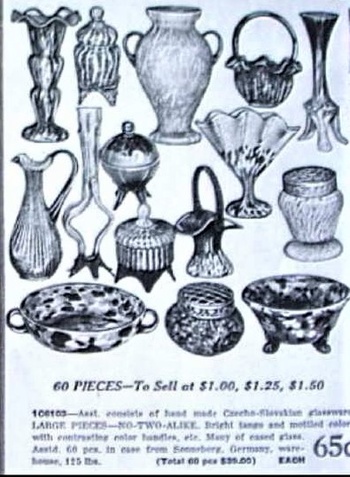 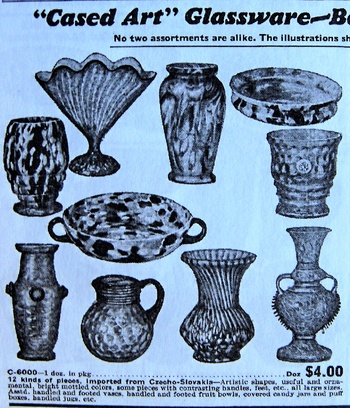 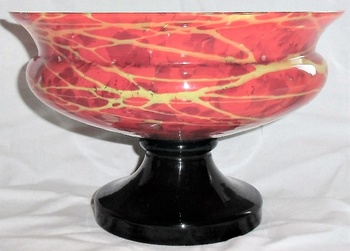 This ad by Butler Brothers has always been controversial for me, as the 2 shallow flat bowls did not seem to belong with the rest of this 60 piece assortment. The 15 items shown are only 1/4 of the contents of this offer, you might notice that the description says it comes direct from a warehouse in Germany in one very heavy container, which is unusual in itself. Its' not usual that BB provides where the shipping takes place as far as Czech glass exports.

I happen to believe that both the bowls I show are a Ruckl version, and there are probably a Kralik ones too. Some might be on a black pedestal glass foot, or a tripod glass foot in a much smaller size, many available to be seen on here, CW. All the glass pieces shown are Ruckl and mine. I dont have the leeway here to use dozens of glass examples owned by others to prove my point.

My bowl was used as a comparison in a three bowl image on a link, in a comment on another post, for me the shapes and proportions are different of each bowl in height versus width. This is always ironic, to see these variations, but they do not seem to matter to the poster. Yet change the topic and the maker and the scrutiny of every aspect of the glass piece is immense. Why does it need to be only one glass house as producer instead of two or three, another mystery? The glass in common shapes made during the interwar period was previously explained by the same collector as a trend that was popular, like bell bottom jeans during the 1970s....

It's too bad the cut and paste ad images, were not as detailed as the American glass they sold and their images. These must have been cut out from a distributor catalog, as they all seem to be from the same source of publication and drawings. Just a recent idea I have based on the differences in art work and detail.