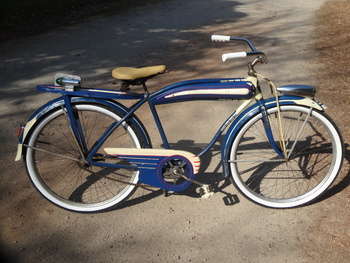 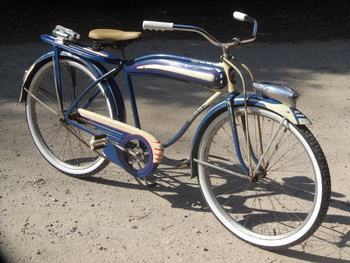 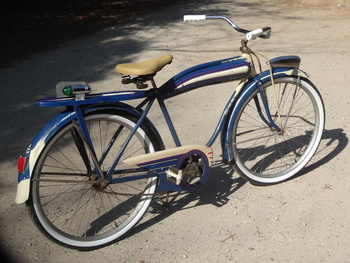 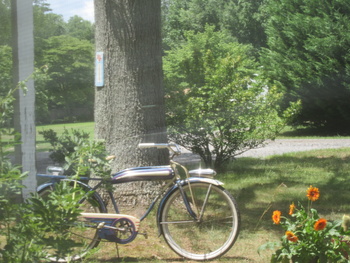 This is a 1947 Columbia Deluxe Bicycle, reckoned to have been originally sold and used in the Southwestern region of Virginia. It is currently 71 years old and in good working order. A lot of the paint on it is original, and it has all of the works. It is believed to have been in pretty regular use over the years, and is certainly in regular use currently. As I don't really own any typical new bicycles from nowadays, I have a few of these older bicycles that I use. This one probably sees the most action, and is ridden around 10-20 miles a month, thereabouts. Working headlights, and port & starboard taillights, and standard electric horn in the tank. New Departure Model D Coaster Hub. Like most bicycles from back in the day, it rides nice and smooth and comfortable; it definitely feels deluxe! Being from the 1940s it is built entirely of thick, heavy American steel, and weighs about 50-60 pounds without any items tied down on it, compared to the average modern bicycle nowadays weighting say, 25-30 pounds. It takes a bit of effort to go up a longer hill, but when you're used to riding bicycles like these, you don't really notice any difficulty. I would recommend everyone to give a vintage bicycle a try if possible; just like driving a classic car, there's nothing like riding a classic bicycle. Thanks for reading, and have a nice evening!