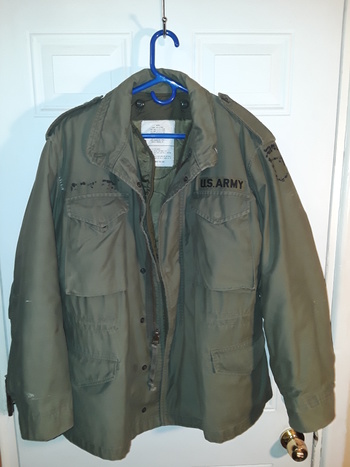 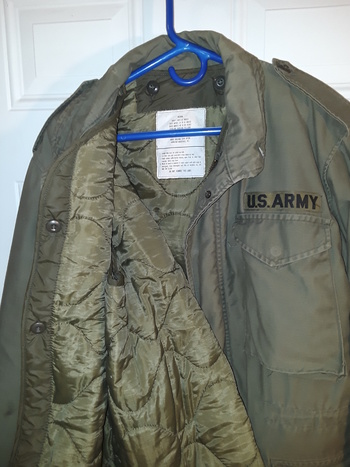 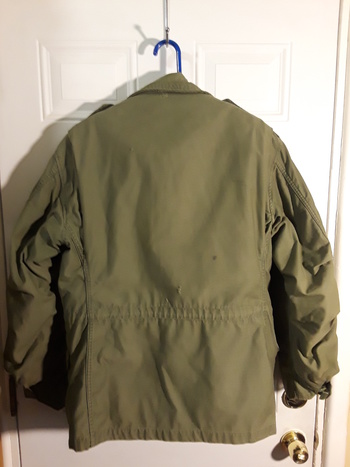 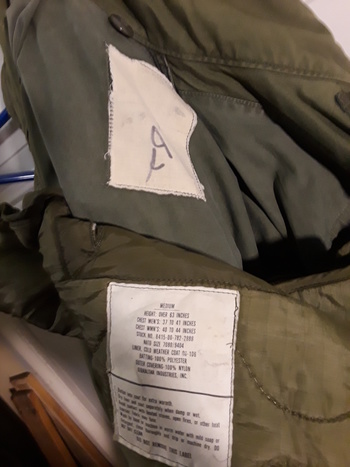 Still "the warmest coat in my closet" after all these years (not to mention "most durable", I'd suppose??) having outlived at least one or three other contenders in the meantime since I've had it. It got dragged out this afternoon for the first 'really cold day' this season, so I figured why not show it? :-)

I got the coat back in the mid 1980's or so, from my buddy Gene who was then serving in the U.S. Army Reserve. These 'plain olive drab' jackets were being officially phased out of duty (in favor of the very first 'green cammo pattern', I think?) at the time, so he was able to get hold of it (and a few more IIRC, which other friends ended up with) as they were being "retired". It retains its US ARMY insignia patch over the left breast pocket, but only adhesive remains of its original soldier's name on the right front and unit insignia on the shoulder. It came complete along with an additional button-in quilted liner (it much less 'used' than the coat itself) and more buttons, zippers, drawstrings, and velcro fasteners than ANY single coat has the right to have. <lol> Between all of them and its inherently wind/water/every other thing but bullets-PROOF fabric -- well, let's just say the Army did their homework back when they engineered and produced these things...?! <lol>

The original label inside the coat itself has long faded into non readability but the label on the liner is still intact, showing all the typical government/military 'property info'.