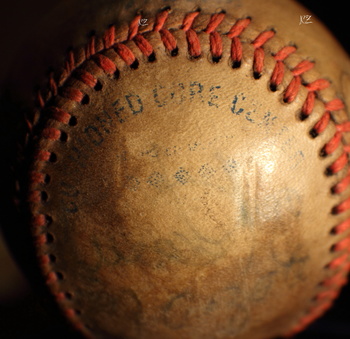 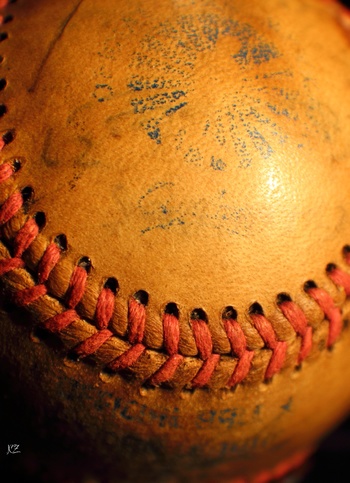 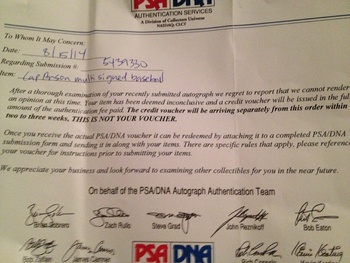 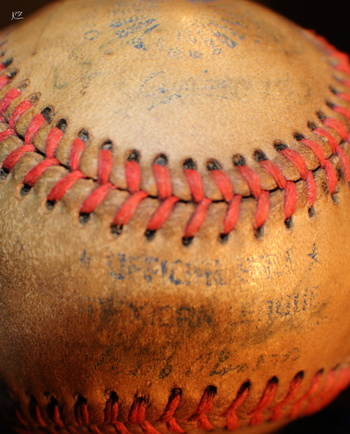 The Mystery Baseball
My Goodwill ventures started a long time ago in the mid 1960’s due to my mother trying to make ends meet. I was very fortunate as child to have held a Mc Mahn’s promotional baseball in my left hand and a Reach promotional swinging batter logo baseball on my right, two very old baseball. The Mc Mahn’s ball was unknown to me, but the Reach ball was not because Reach made a lot of products which I personally used in little league baseball. I spotted them while I was helping my mother find what she needed and left them where I found them. Very fortunate to have had that experience, not many can say the same. In 1997 I encountered a another very old A. J. Reach swinging batter logo baseball at the Goodwill Store. It was identical except for the fact that this one carried championship lettering ( 4CHC OF WCHSC ) plus below it were three small quarter inch diamond fields. My focus was not on the fact that it was an old Reach ball that nobody wanted. It was on Championship lettering that could possibly net me some money. Unable to do so made me decide to buy the items I had in my hand already. I did one special thing before putting the ball back. I made it clear that I would very carefully record all the letters and words in hopes that one day i find out whether I did the right thing by not buying it. When memorizing all the letter and words I encountered problem that did not make sense with a word. Initially I read the ball as OFFICIAL BALL MEXICAN LEAGUE, WOW! It only took me a second to say impossible! Everything is printed in English and the ball is saying that it is, Mexican! No! No! When I looked again I noticed very clearly the word was in fact ( MErICAN ) the lower case (r) was pushed to the top which I didn’t catch at first thinking it was the beginning of the upper case letter (X) which was not! Thanks to my intuitive mind I was not fooled! And I hope you understand what I’m saying! But I agreed that many will insist that the word has to be MEXICAN because there is no such thing as MErICAN, isn’t that the truth! I personally would had to agree but as I faced the ball towards the sunlight I discovered the truth! A fine light hair strand of the uppercase Letter (A)! My god! An AMErICAN, LEAGUE OFFICIAL BALL! Thanks to me I figure it out! A miss print which did not answer the important question of the Championship lettering. No knowledge! No money! No gain! No history! Boy, was I wrong! In the winter of 2012 i found a very old and battered signed baseball at the Goodwill Store. I bought it not knowing what it was. As I was examining the ball I realized that I had made the biggest mistake not buying the last A.J.Reach baseball. Wow!!! Even though one can not read it very well, it’s ok, because I know every letter and word. And as a consolation prize I guess you could say is buying the five diamonds game winning 5 game series signed baseball pertaining to the Championship of the West 1876! Amazing! The burden is not on me is on those who read to fast, make no sense and have no knowledge. I can excuse those who have no knowledge but not the ones who claim to know and insist on labeling the ball MEXICAN LEAGUE. And just so you know I asked my brother in law who was a major league player in Mexico, 1955. He said there was no Mexicans in Mexico playing baseball with names like Anson, Burkett, Gleason, Leonard, George Washington Bradley, Mason, Cuthbert, or what ever other signatures are on that ball. In Mexico they only play with LIGA MEXICANA baseballs, so the burden is on the AMErICAN people that love baseball. If there was a so called OFFICIAL BALL MEXICAN LEAGUE, which normally contain eight teams, Spaulding would have found out about it and recorded it himself. Many Newspapers are confused looking for expert advice. It’s understandable, but with the help of several supporters the ball has gain truth and ground. I want to thank supporters like Jon David Cash, P.A.A.S. Mike Frost and experts, Jacob and Whitaker of Echo Newspaper from Helotes Texas for taking action on Nov of 2013 in their sports section, and Roy Bragg of the Express news for reporting on May 4, 2017 plus PSA/DNA for trying to value two signatures on the ball, but came out short due to the fact that they could not match the ball with the use of Brandon Grunbaum’s baseball book of knowledge. I don’t want to leave out all those who are currently supporting the cause and would like to know more about this mystery baseball. So! If you are a fan of baseball look again slowly without nonsense so you can make sense of what your looking at because it is important to baseball! So! If you know something we don’t know about this mysterious baseball! Now is the time to define yourself! You read it here in Collectors Weekly Magazine! Where you tell your story!