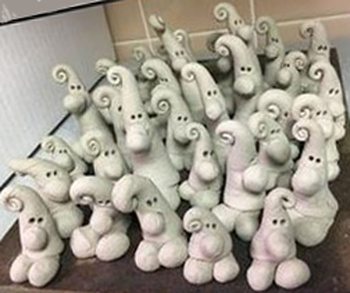 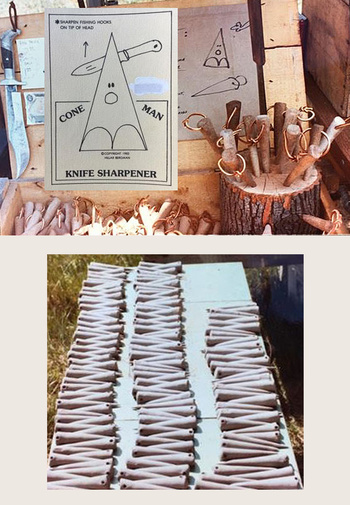 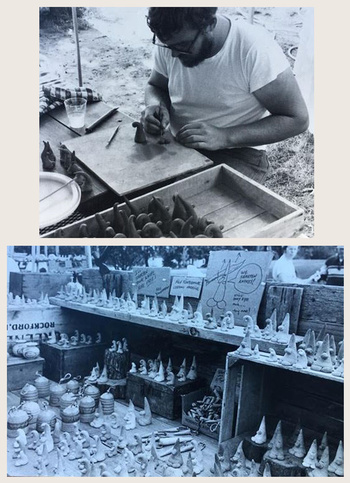 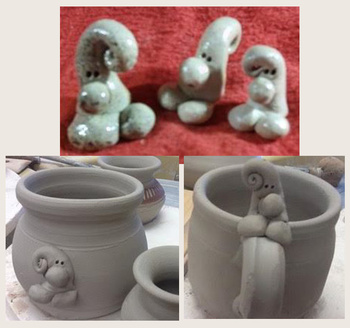 A while ago I made a posting here about Michigan studio potter Hillar Bergman and a couple of his odd little figurines. To refresh everyone's memory, if you copy-and-paste, it can be read here -
https://www.collectorsweekly.com/stories/210580-hillar-bergman--studio-potter-michigan

Recently I was contacted by Hillar Bergman who wanted to let me know he was indeed still alive and active. This was followed with a series of delightful emails where he explained the background of these figurines. "I primarily made just two items. One was the figurine, and the other was a tapered ceramic cone, with an appearance something like a carrot," he explained of the mid-1970s beginnings. The "carrots" and the figurines were both sold as knife sharpeners in the beginning. Bergman explained he had read that pioneers sharpened their knives on the unglazed bottoms of crockery and the concept developed from there. The "Cone Man Knife Sharpeners" were designed so you could also sharpen your fish hooks. Some had a conical hole on the underside meant to be used to keep your darts sharp. They were stoneware multi-tools with personality.

The first and last pictures above show some of Hillar Bergman's more recent work. The figurines are salt-glazed now and, no longer concerned with sharpening fish hooks, their pointy heads have relaxed into a curl. The center pictures are from the Hemlock Pottery days (mid-1970s - mid 1980s).