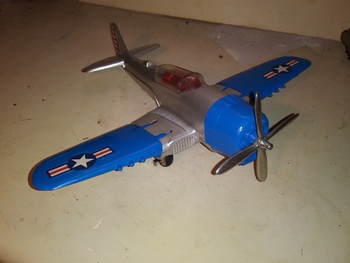 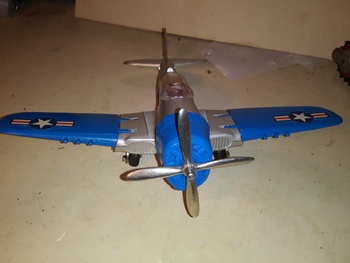 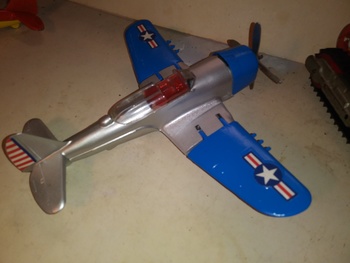 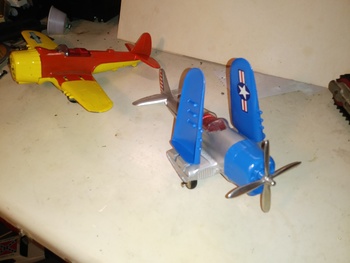 Just finished another Hubley #495 airplane. This one is painted in the blue/silver scheme that only came in a particular set in '58. The aircraft was not catalogued separately in these colors. The #495's from '56-'60 were red/silver normally. It has the Blunderbuss2 approved upper fuselage without a hood scoop behind the cowling. Actual planes in these color are HTF due only appearing in only one set for one year. I don't want to elaborate on the set right now. I hope to actually share the set in early December. I restored it like this for that purpose. It was pieced together from various 495's I acquired and I modified a post '60 cowl to fit it. The blue isn't exact but pretty close and I can live with it. I used a Chrysler silver from Pep Boys and when I sprayed some on the inside of the fuselage next to some non oxidized original paint,it's impossible to tell the difference between them. I consider this to be the most accurate Hubley silver I've found and it's only about $5 a can. I highly recommended it for an accurate Hubley color. The prop and replacement insignia stickers came from Ebay. I confiscated the canopy from my Flying Circus 495, I won a another Circus plane that was in better condition overall to replace the plane I had . It worked out great because the new plane has great paint except for the upper fuselage. The other plane has a upper fuselage in great shape and paint loss everywhere else. I can slap the better upper fuselage on the new plane and have a Flying Circus plane in optimum condition and another in good condition. I got a good deal on the new plane, it has a canopy and prop that are missing on a lot of the 495's. I hope to share(knock on wood) a cool Hubley set with this plane in early December.
Thanks for dropping by,
Bill