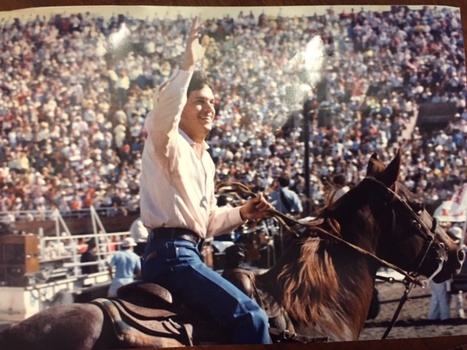 -DO NOT COPY THIS PRIVATELY OWNED & COPYRIGHTED PHOTO-
THANK YOU GEORGE STRAIT FOR BEING A GRACIOUS AND RESPECTFUL REPRESENTATIVE OF COUNTRY & WESTERN MUSIC.
This photo was taken from the stands of the Huntsville Prison Rodeo in Huntsville Texas in 1985 by me & with my camera.
I was invited by a kind friend Corwin Whitfield of Corsicana, Tx. to attend "a great rodeo and concert by this new country music singer" (George) who was filling in for someone else that could not sing that day. My friend named a couple of George Strait songs and I did remember hearing his music. After all, I just spent a year working on a big Texas cattle ranch and listened to country music on a daily basis. If I only knew that I was watching history in the making, at that time. At least I brought my Cannon AE-1 with a long telephoto lens and doubler. I snapped a shot of him from my nose bleed seat, as he passed us on his horse. I later had the film developed and was almost surprised to see that I actually caught his face in the photo. As the years passed and he became "The King of Country Music" I just can't help but finally share this rare photo with the public. I don't want to take a good scan of the photo until I can do it correctly but I do have the only copy rights. I took a poor photo of the photo to share it here. You are the first to see this photo. Please respect my rights as the owner of this rare photo.