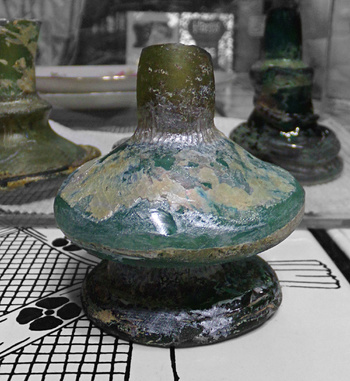 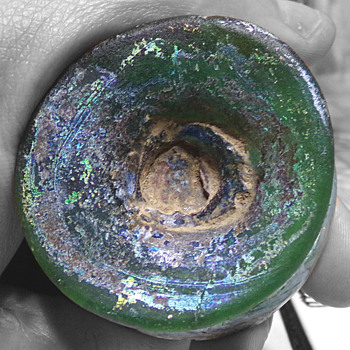 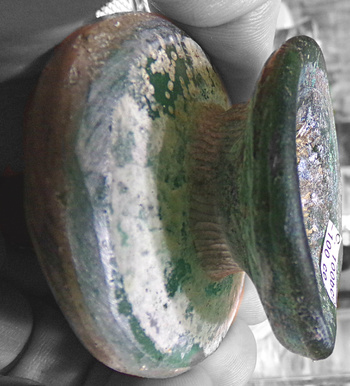 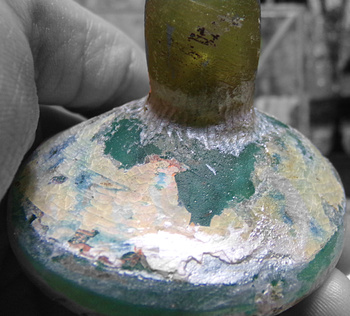 This bottle seems to be a bit earlier than some of my others: turn of the first millennium C.E. or earlier. Because it seems to have been painted with a metallic silver on the body, and the shape is a bit odd, it's probably a later Graeco-Roman bottle, fitting the Hellenistic era quite well though the brushed tin or pewter on the separately applied neck and separately applied foot is usually a later characteristic. The painting of bottles was most common before the first century C.E., though it reappeared around 400 C.E.
As a university catalog puts it, the "weathering" appears almost like a glaze on some of the bottle. It shows typical decomposition and mineralisation with patination. Minerals in the glass leach out, and new ones take their place. Some of the glass has also become pitted and flaky due to the "weathering", which is in my opinion a poor term for it as it leads one to think that it got hit by years' of rain or wind. It is nothing more than a chemical process that takes place in the ground. The glass is no longer a smooth, lustrous surface; but is, rather, dull.