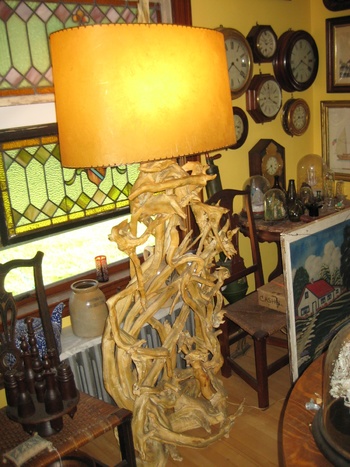 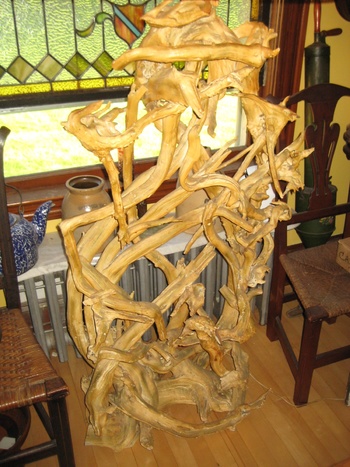 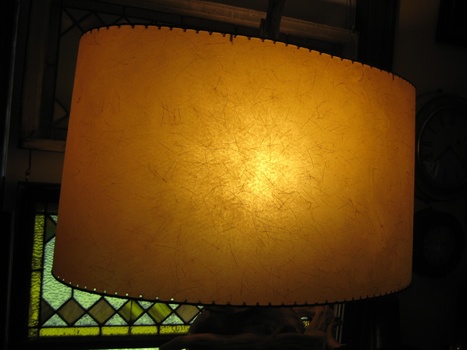 Like many, I find myself exploring and developing an increasing appreciation of objects now referred to as "Mid-Century Modern". My working definition is that they were made from about the 1940's-1960's. I realize that this may not be the proper academic definition, but it's mine. A real departure for me as I typically seek earlier objects and lighting.

Some rather interesting and fun objects were made in this period. They were sometimes inspired by earlier designs, sometimes there's no clear inspiration that I can discern. They might also be composed of new materials and produced using industrial processes.

Not too long ago, I found this floor lamp in my travels.

It is made entirely of pieces of wood. Sometimes these lamps are called "driftwood" or "riverwood" lamps. They made be found as both table or as in this instance, floor lamps. The surface may be left natural or given an almost whitewashed finish. This lamp has an original light tan surface applied. Rather organic and free form using a rather traditional material (wood). There is an earlier tradition of "Adirondack", "rustic" or "root" furniture composed of burls, branches, twigs etc. but not nearly as free-formed as this lamp is.

The shade is original, massive and survives in wonderful condition. It is made that mid-century wonder material, fiberglass, attached to a metal frame with lashing. Often this type of shade has damage or years of incandescent bulbs leave scorch marks or the lashing is damaged, etc. IMHO, a fabulous mid-century shade of unusual size. Note the original "driftwood" finial.

Has quite the presence and seems comfortable in front of a stained glass window between 2 country Chippendale chairs?

I say have fun, mix it up. Every design period has something to offer.