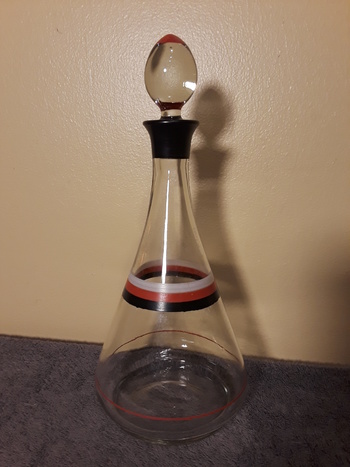 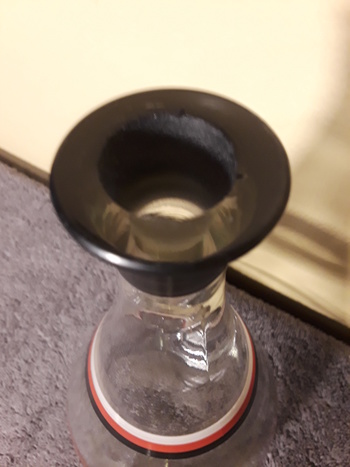 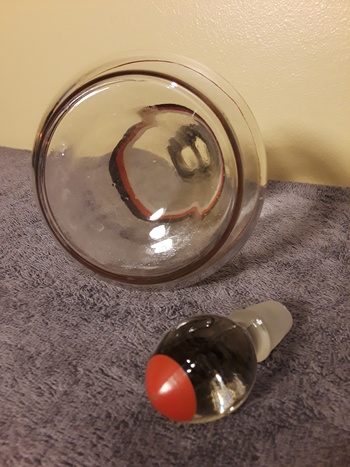 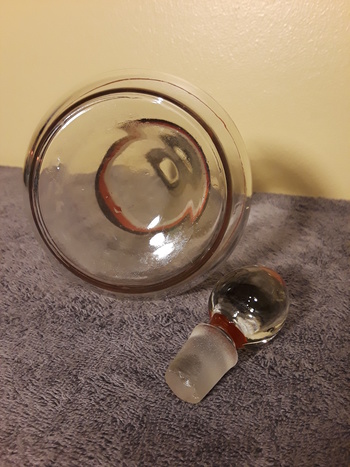 Another Goodwill prize today, though this one cost me more than a buck. (less than $10, though...) I'm thinking it has got to be mid-century 1950's or so, but have not yet researched it for that to be anything more than a guess. They actually had it displayed in the showcase at the checkout counter (which often means things they think are "antique" and thus "valuable") but happily it was reasonably priced -- because it *immediately* appealed to me when I first spotted it. (thus I probably *would* have paid a little too much for it...? <lol>)

It is a tapered clear glass decanter with (solid) glass stopper, about 5" at its widest and 11" tall with the stopper in place. (the stopper itself is a little over 3" long) Made of molded glass, with a visible vertical 'seam' on both sides of the bottle and stopper. It is decorated with a very narrow red band around its widest part, a trio of black/red/white bands around its midsection, and a wide black band at its top. (which stops at the uppermost edge of the bottle, its actual flat 'topside' is clear) The top end of the stopper features a red tip. All the decoration appears to have been "painted on" to the exterior surface of the glass somehow. It does not have any markings to suggest who might have made it.

It definitely looks like it has seen some usage -- there is a little bit of visible whitish 'lime deposits' (or whatever) on the inside of its neck, as well as a few tiny fleabites on the edges of both the stopper and bottle.

I'm going to mark this an 'unsolved mystery' in the hope that maybe somebody might recognize something about it that could help me learn anything more about it...beyond standard matters of age/maker, for instance, would its decoration style have anything "art-deco" about it?? I'd LOVE to hear anything that any of y'all much more knowledgeable 'glass folks' around CW could tell me?!!! :-) :-) :-)