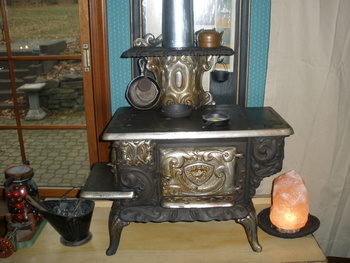 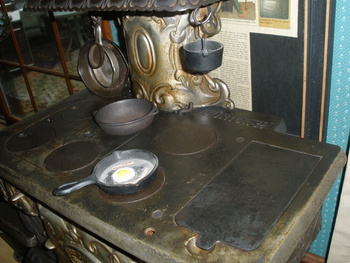 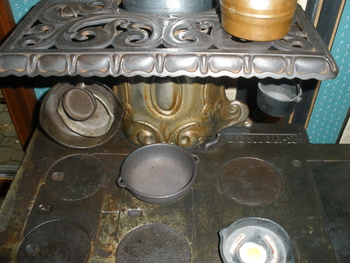 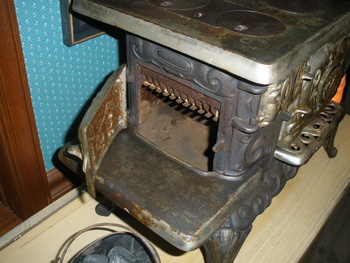 Four years ago I posted some of my toy cast iron stoves that children actually used in the 1800's.
My wife and I stopped in at a local auction house after we ate dinner at a favorite restaurant.
The evening was young so we had time on our hands to attend and see what they might have left for selling. The auction was for a local collector and also a friend of mine. I thought that there might be something that interested me.
After rummaging through the box lots in the lesser gallery, I walked into the main auction gallery where another auctioneer was selling. While looking around, I spotted this cast iron child's stove made by the Buck's Stove & Range Co. , St. Louis, MO.
It is a Buck's Junior #2 and was built circa 1890. It was made of cast iron and some of the details were nickel plated.
I examined it carefully and saw that it was in impeccable condition for it's age. No breaks cracks and all of the parts were intact ( three stove cover plates were missing, but I later found them in the ashes of the fire box)
What impressed me the most was it's size. It was at least 22" wide and about 30" to the top of the stack. All of the other cast iron child's stoves that I own are approx. 12" to 14" wide.
At the time,this must have been an expensive toy for someone's daughter.
It contains all of the features of the full size kitchen cook stove like the one we have in our enclosed patio. It has a water heater box, a warming shelf, even has a damper to direct the heat flow around the oven or under the stove plates.
I still find it hard to believe that children were allowed, by their parents, to operate a seemingly dangerous item like this.
Maybe children of that time were more attuned to the safe operation of a coal/wood fired range.