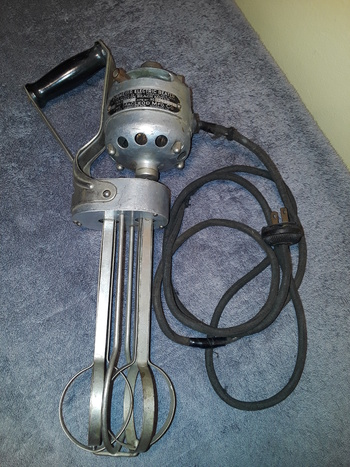 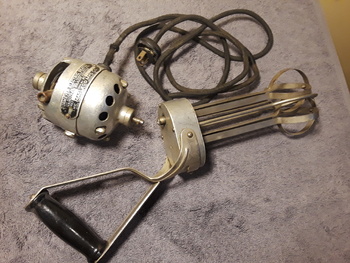 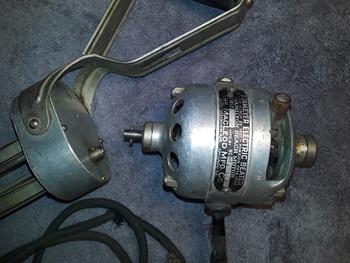 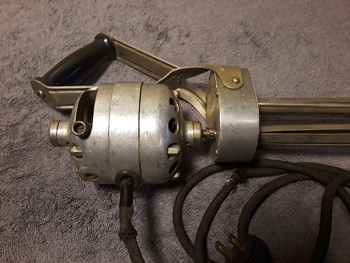 I (finally) came across this little machine again today while searching thru boxes for something else -- didn't find the thing I was looking for but no matter, I've also been wondering where it had gotten off to so was happy to re-discover it...it really should be somewhere hanging 'on display' in my kitchen, instead of being buried in a box...? ;-) :-)

This is a DORMEYER ELECTRIC BEATER, made by THE MACLEOD MFG. CO. of Chicago with HAMILTON BEACH MOTOR. According to info here:

DORMEYER was apparently an early competitor with SUNBEAM (that ultimately didn't survive the competition) for small electric kitchen appliances. Also according to info at that website, "In 1927, this company produced the first electric household beater that featured a detachable motor for cleaning purposes." I'm guessing this is one of those machines...?

I picked it up someplace ~30yrs ago because I'd never seen anything else like it and I thought it was nifty. Though its power cord is in sorta shabby shape, I *have* (long ago) plugged it in, and it absolutely DOES still operate just fine -- the two-ended brownish 'lever' atop the motor actually serves as a "variable speed control" in addition to power switch -- moving it from the 'off' to 'on' position starts the motor running slowly and increases its speed as further moved. And this machine most certainly *has* been well used by somebody somewhere already -- probably not visible in pics here, but there are pronounced 'wear marks' on the cross-pin/socket connection between the motor and the beater parts.