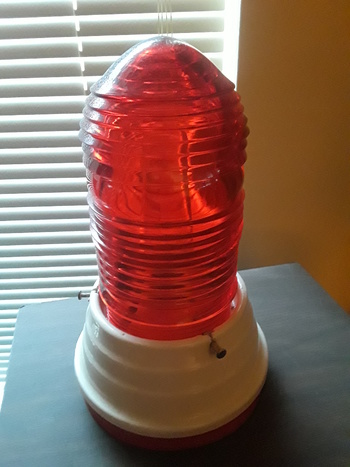 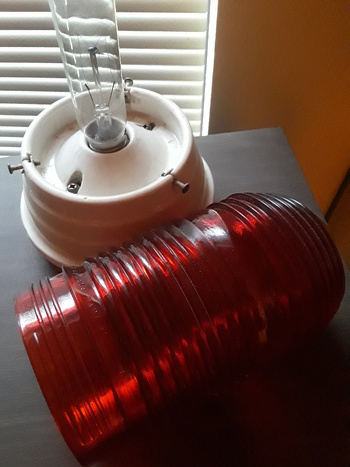 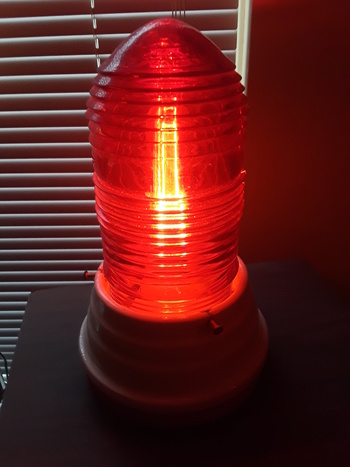 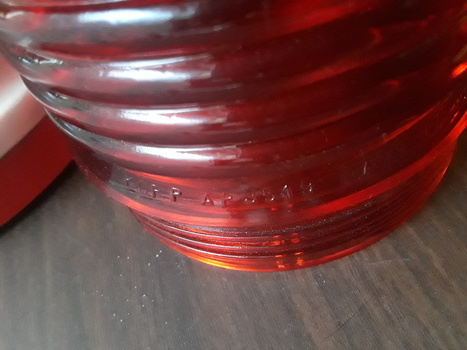 New member Lani showed her similar little red lens the other day (wondering if it was an insulator) which got me thinking...I don't have one quite that small (wish I did, it's *cute*!) but I DO have several others kinda like it...? ;-) Here's the biggest one of 'em. :-)

From ebay several years ago, it measures about 7-1/2" tall by 4" across, made of sturdy (molded) red glass with threads on the outside of its open end such that it would have 'screwed on' to its original fixture. I don't have one of whatever those exact fixtures were, instead displaying it sitting in a wonderful vintage (1940's?) white porcelain ceiling light fixture I mounted to a painted plywood circle/base. Sorta funny story there, I actually also bought what I thought *was* one of the correct fixtures for a lens like this (from another seller) at the same time -- but when whichever was the 2nd box arrived, I immediately realized that I'd made a big error in judgement (and/or either seller wasn't completely clear with dimensions of things, or whatever) since the two were more than an inch off... <groan><headdesk> but happily, it accidentally ended up being perfectly sized for the old porcelain fixture (from the ReStore I think, it first found encrusted in numerous thick layers of ceiling paint but turning out to be a lovely thing unto itself once I cleaned all that crap off of it) that I already had.